The God Of The Kiln 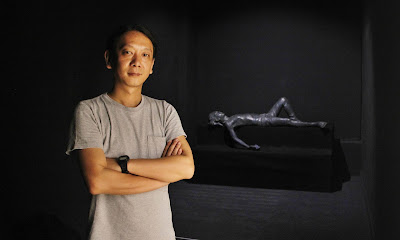 Japanese artist Takayuki Yamamoto recreates a folktale, at the Kochi Muziris Biennale
Photo by Albin Mathew
By Shevlin Sebastian
As you step into a dark room, at the Aspinwall House, Fort Kochi, at one end, you can see a sculpted figure of a man lying face-up on a platform, with long flowing hair, bare-bodied, with one arm outstretched.
Standing next to him in a blue t-shirt and Bermuda shorts is the Japanese artist, Takayuki Yamamoto. In fact, there is a striking similarity between the face of the figure and the artist. “Yes, it is a self-portrait,” says Yamamoto, with a smile.
His Biennale exhibit is titled, ‘God of the kiln’. And it is based on a Japanese folktale. There was a childless couple who found a baby on the street. They raised him up. “One day, the boy pricked his belly button, and a golden grain came out,” says Yamamoto. “So the family sold it and became rich. But the grandmother became greedy. So she tried to dig out more grains, and, in the process, the boy died.”
The grandfather felt sad. So he made a mask of the boy. In north-east Japan, this mask is placed in the kitchen to protect the people from a fire. “That is how the boy became known as the God of the Kiln,” says Yamamoto.
Interestingly, at the exhibit, once a day, a golden ball will pop out of the navel. “After a month, there will be 30 balls on the floor,” he says. “Eventually, 100 will come out. It is based on a computer programme.”
Incidentally, the 6' long figure, painted in bronze, is made of fibreglass resin. “It took me a month to make it,” says Yamamoto.
The message that he wants to convey is that the world is convulsed with greed. “Greed is the dark aspect of civilisation and modernity,” he says. “Everybody has a greedy nature within himself. But when you indulge in it, it is usually at the cost of somebody else's suffering.”
Meanwhile, when asked about his experience at the Biennale, Yamamoto says frankly, “At the start, a lot of things had to be set up. But then everything turned out well. I like the atmosphere and the freedom that artists get in this biennale. That is the advantage when a bienalle is run by artists instead of corporate people.”
One night, Yamamoto attended a party on the Fort Kochi beach. “People were dancing and shouting,” he says. “I enjoyed it a lot. In Japan, people are reserved and shy in public.”
Yamamoto grew up in Aichi (350 kms from Tokyo). He showed an early inclination for art. Eventually he did his masters in fine art from the Chelsea College of Art and Design, and also studied at the Byam Shaw School of Art, both in Britain. He has done nine solo exhibitions, as well as 40 group exhibitions, in places like Sydney, Melbourne, London, Rotterdam, Edinburgh, Athens, San Francisco, Singapore, and the Netherlands.
His works involve portraits and video installations, which mostly involve children. In ‘A Week Of The Animals', a Dutch schoolgirl sings a Russian folk song, while a monkey hovers above her head:
On Sunday, I will eat some salad.
On Sunday, I also get sleepy.
Tula Tula Tula.
On Monday, I sleep the whole day,
On Tuesday, I wake up.
Tula Tula Tula.
On Wednesday, all the people watch me,
On Thursday I feel happy,
On Friday, I have a look.
On Saturday, you will only see my body.
Yes, my friends, this is my workweek.
Tula Tula La.
There are also songs involving crocodiles and elephants.
“I enjoy working with children, as well as being an artist,” says Yamamoto.
(The New Indian Express, Kochi and Thiruvananthapuram)
at January 17, 2017