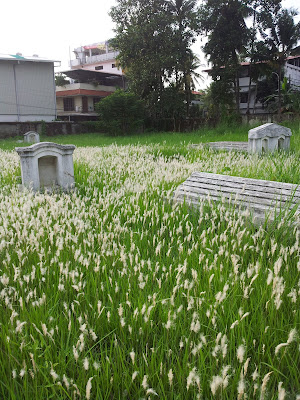 Even as the tiny Jewish community in Kochi renovates their cemetery, there are fears that part of the sacred ground will be taken away for road expansion

On November 23, 2016, Josephai Abraham (Sam) stood inside the 1.5 acre Jewish cemetery on the Kathrakadavu-Pullepady road, Kochi. It was the burial of his mother-in-law Miriam Joshua, aged 89. “When I looked around, I suddenly realised that the cemetery was in bad shape,” he says. Many tombs could not be seen because of the high grass.

There were more problems. “At one corner, neighbours had thrown their garbage, in plastic packets,” says Sam, the president of the Association of Kerala Jews. “Some inhabitants had pushed their water pipes under the wall, so that all the waste water would flow into the property.”

So Sam decided to do something, with the backing of six families of the association. Workers were hired, grass and weeds were chopped off, and, at one side, where there was a marshy pond, several layers of building waste was put in, to smoothen the surface. “Thereafter, interlocking tiles have been put,” says Sam. “At least, now, we can park our cars inside. Otherwise, we had to do so on the narrow road and it created problems for the other motorists.”

The walls have been painted white and many tombs, which were broken, have been repaired and repainted. And, on the wall, at the opposite end to the entrance, two Star of Davids have been etched, along with the seven candles of the Menorah. The Menorah has been a symbol of Judaism, from ancient times, and is now part of the emblem of the state of Israel.

However, it has not been smooth sailing. One neighbor approached Sam and told him he could not do any renovation, as all construction has been frozen. On being asked how, the neighbor said there are expansion plans for the road and the cemetery will be taken over. “I said no such decision has been taken,” says Sam.

Then, in mid-January, Gracy Joseph, Chairperson, Standing Committee for Development of the Cochin Corporation, came to inquire. “I had received complaints from the local residents that some construction was going on,” she says. “But the members of the Jewish community told me that they were only renovating the place.”

Clearly, the cemetery is under threat. “The Cochin Corporation has plans to broaden the road,” says Association secretary Dr. Susy Elias. But Soumini Jain, the Mayor of the Corporation says that the stretch in front of the cemetery has been handed over to the Public Works Department of the State government. “It is they who will do the road expansion works,” she says. “There are suggestions of building an overbridge, in front of the cemetery. But whether the government has the funds for that, I am not sure.”

Meanwhile, according to Jewish religious law, once a person is buried, the grave cannot be disturbed. It can only be removed if a relative gives permission. But the local Jews have no idea where they are, since many have emigrated to Israel several years ago. So, the Jews are anxious about whether the authorities will insist that they will have to give up a part of their cemetery. “Many tombs will be disturbed,” says Sam.

Sometime ago, the association got in touch with Israeli ambassador Daniel Carmon. Thereafter, last month, the Bengaluru-based Israeli Counsel General Yael Hashavit met Chief Minister Pinarayi Vijayan and appraised him of the situation. “The CM said that he was aware of it,” says Mordokkayi Shafeer, the treasurer of the association.

Meanwhile, despite these tensions, the Jews come once a month to light candles and to pray at the graves. “We also come on death anniversaries and during the Yom Kippur (Day of Atonement) festival,” says Shafeer. “Life has to go on.”