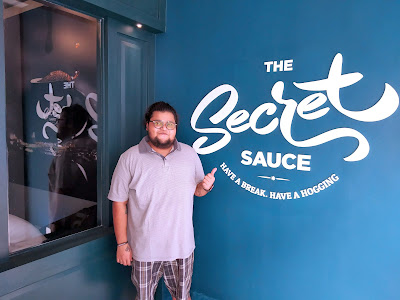 The just-opened ‘The Secret Sauce’, a hip cafe at Thevara has become a hotspot for youngsters and families alike

Singer Don Thomas picks up a guitar that is placed against the wall of ‘The Secret Sauce’ cafe at Thevara, Kochi. With a gleaming bald pate, and wearing red shoes, he soon launches into a song:

The group of youngsters are half-listening to this cover version of a Charlie Puth song, sitting on benches, as they converse with each other and have chicken burgers, omelette wraps and club sandwiches.

‘The Secret Sauce’, which began on November 2, is a new place to hang around, especially for youngsters in the Thevara area. Located next to the Food Mart, students from the ‘Sacred Heart College’ (SHC), as well as the ‘Brilliant’ tutorial centre in the next building and employees from nearby offices drop in. “Young couples who are dating also find this a nice place to hang around,” says Tarun Eldo Mathew, who is one of the partners and doing his third year in BA English at SHC.  “Families also come, especially on the weekends.”

And good food can be had. Because the chef is Nithin K Bahuleyan, who had been associated with a five-star hotel group for the past 18 years and is now a partner in the Sauce. All the items are tasty and delicious.

One of their popular items is the aptly-named ‘Juicy Lucy’. Priced at Rs 160, this is a burger which has cheese, meat as well as potato wedges. Another is the chicken tikka, which has spicy masala in a soft wheat wrap. Then there is the secret club vegetable sandwich which is a triple decker with fresh grilled vegetables, English cheddar and French fries. And one must not forget the Bombay Masala. “This is a street-style vegetable and cheese sandwich,” says Tarun.

However, by mid-December, the cafe will be adding steaks and pastas. “Those who come during the lunch break want a quick meal before they go back to their offices or colleges,” says Tarun. “So we are adding dishes that need less preparation time.”

One regular is Samuel James, a BA student. “What I like about ‘The Secret Sauce’ is the ambience,” he says. “It is very clean and fresh. There is a guitar there. So, if you are a musician, you can come in and have a jamming session. The vibes are positive. A lot of young people come in and we can talk over the food, which is amazing, too. Everything is made very fresh.”

Samuel’s favourite is the chicken calzone. “It’s got chicken, mushroom and cheese and I love the flavours,” he says. “Very sumptuous. And this is the only place in Thevara where you get Continental food. Otherwise, you will have to go to Panampilly Nagar.”

Meanwhile, on asked the meaning behind the name, ‘The Secret Sauce’, Tarun says, “Every chef has a secret ingredient, a secret style. And we feel that Nithin and his team are adding a secret sauce here and there in the dishes.”

As for how Tarun, as a college student got the idea to start the cafe, he says, “I am a foodie. So I always wanted to do something related to food.” But in order to minimise the financial pressure, there are six partners. “Most are family friends,” says Tarun.

But Tarun has other ambitions, too. He wants to be an actor. “I would like to go to a drama school,” he says. In fact, he has already appeared in an ad film for a condiment company. And if he wants, he can take the help of Mollywood star Asif Ali who stays on the 10th floor of his apartment building. “I hadn’t thought about that,” says Tarun, with a laugh.