"Yogi-San, we are going to vote for you” 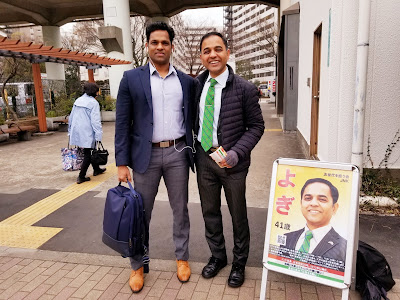 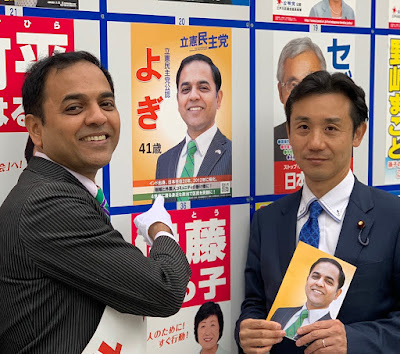 The Pune-born Yogendra Puranik became the first Indian to win electoral office in Japan. He talks about his experiences

Through the corner of his eye, Yogendra (nickname: Yogi) Puranik notices a man in a wheelchair, who is hovering near the edge of the crowd in the area of Kasai in Tokyo. Yogi is campaigning to win a seat as a councillor in the Edogawa Ward assembly. The 35-year-old man stands up, and with the help of people next to him, manages to come near Yogi.

Then he says, “Yogi San, what are you going to do for the handicapped people?”
For a few moments, Yogi is flummoxed. He is a dynamic-looking 41-year-old, with an easy smile, wearing a black pinstripe suit, a green tie and shiny black shoes. On his lapel, Yogi had pinned two tiny flags next to each other: that of Japan and India. He also has a white sash across his chest which displays one word, in red Japanese letters, ‘Yogi’.

The man says, “Yogi San, I like the way you acknowledged that you have not written about our concerns in your election manifesto. I believe you are a person I can trust. So I am going to vote for you.”

Wherever he goes, be it in parks, outside metro stations, office buildings or malls many people shake his hand and say, “We are going to vote for you.”

And they did. Because when the election results were announced on April 23, Yogi became the first Indian to win electoral office in Japan.

It was the culmination of a long journey. It began after he completed his Class 12 studies, and his father suggested that, apart from studying physics and IT, Yogi should study a foreign language. “My father told me Japanese could be a good option,” says Yogi. So, in July, 1994, he began a three-year degree course from the University of Pune, where the Puraniks lived.

He liked the language and was able to complete the course. In September, 1999, he got a scholarship for a one-year course. “We were given housing, and lived in a cosy environment,” says Yogi. “Everything was well taken care of.”

Following his return, he started working for an IT company in Pune. Then, in March, 2001, he got a job in an IBM company and returned to Japan. But this time he did not enjoy his stay. “I found the society to be very hard,” he says. “The Japanese are, on the surface, very receptive and polite, but actually, they keep a distance from you. Even among the Japanese, they keep a distance from each other. So when it came to a Japanese and a non-Japanese, the gap is quite large. So, I started feeling very lonely.”

He resigned after eight months and returned to Pune. But fate had other plans in store. When he joined Infosys in 2003, they sent him back to Japan once again. But this time, Yogi was determined to do something about his isolation.

He started participating in community gatherings, meetings, and the Parent Teacher Association in Nishi-Kasai, the area where he lived, in Tokyo. “I went to local festivals, not just to attend, but to participate, enjoy the food and help out in the preparations,” he says.

The Japanese got very excited. In the next year, he was appointed as the director of the festival. They told him, “Yogi San, you should be our bridge with the foreigners living in our society.”

And Yogi did become an effective bridge. He also became very popular. But his turning point came during the massive earthquake which hit Japan on March 11, 2011, followed by the tsunami. He, along with a couple of friends, set up a helpline for the Indian community. They received more than 300 calls daily. Apart from that, with Japanese friends, he went into hundreds of local homes and provided a helping hand. “That was when I became close to the Japanese,” he says. “I felt I belonged.” So, in October, 2011, Yogi applied for citizenship and got his papers a year later.

On the personal front, he was briefly married to a Chinese woman, Zhe Zhang, whom he had met at the University of Japan. The marriage did not work out, but they had a son Chinmay whom Yogi brought up on his own. He is studying in Class 12 in Britain.

Asked about his future plans, Yogi says, “I want to become an MP one day. I also want to change Japanese society by making people show more emotion and attachment to each other, just like the Indian way. ”
at June 24, 2019