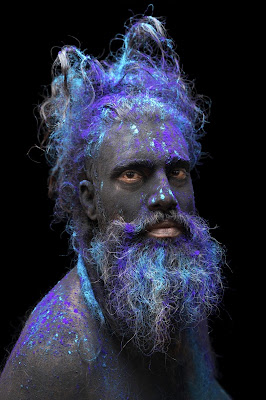 Veteran American photographer Bob Duncan puts coloured powder on men and children and comes up with striking images. These are displayed at the ‘Cochin Colours’ exhibition at the Kashi Art Gallery in Fort Kochi

When veteran American photographer Bob Duncan was walking about in Fort Kochi, he came across stalls selling brightly-coloured powder. It seemed similar to the powder used during the festival of Holi. An idea suddenly struck him. To take photos of subjects with the powder smeared on their faces and hair.

When he initially approached people, they told him, “Holi is not a festival of Kerala, but of North India.”

Anyway, one day, Bob was able to persuade a Spanish woman to take part in the project. As the shoot took place, in front of a black velvet cloth, at the back of a homestay another Malayali friend and his family were watching. Soon, they agreed to be subjects, too.

So, Bob selected their children, Ann Mary Bejoy and Ainn Lionel. While the girl had a blast, for Ainn, some powder entered his eyes. “He cried a bit, but settled down later,” says Bob. In the photo, Ainn looks a trifle unhappy with his face smeared in red, purple powder on his hair and dabs of green on his neck and upper arms. In contrast, the white of his eyes is striking.

Ann, on the other hand, has a blue face, purple hair, with green eyebrows. All these portraits are on display at Bob’s photo exhibition called ‘Cochin Colours’ at the Kashi Art Gallery, Fort Kochi. The show concludes on February 26.

In search of an adult, Bob came across Faizal who sells lemon juice. He had dreadlocks, a flowing beard, a thick moustache and bushy eyebrows. Nearly everybody in Fort Kochi knows the vendor.

Faizal reminded Bob of the photos he had seen of sadhus, with ash smeared on their faces at Varanasi. So the American approached Faizal and the latter agreed to be photographed.

After the shoot, Bob felt happy. “These shots seem to bring out a different dimension in people,” says Bob.

For the past five years, Bob had been doing a project called ‘Noir Portraits’, where people with outlandish make-up and colourful costumes would pose in front of a black velvet background. Taken in New York, Los Angeles, London, Paris and Madrid, these be can be seen on his Instagram page @duncanfotos and @duncan_faces.

And over time he realised that when his subjects wore exotic make-up, they are relaxed because they feel that nobody can see their actual faces. “But because they are relaxed, their true character comes out, especially if you look into their eyes,” says Bob. “You no longer see the make-up but the faces.”

But the subjects must not smile. “When people smile, we only see the smile. When a person is not doing so, many layers of who the person is begin to show up,” says Bob. “Leonardo Da Vinci’s ‘Mona Lisa’ would not be as intriguing if she was smiling. In classical paintings, people rarely smile. As a result, you can look at the images over and over again. And you can detect the different moods which include sadness, serenity, anger and bitterness. We meet people having these moods every day.”

There is a famous photograph of the late Hollywood icon Marilyn Monroe taken by internationally renowned photographer Richard Avedon where she looks tired, exhausted and pensive. “Richard did a session with her all afternoon, in which she was smiling and everything was wonderful,” says Bob. “When the session was over, Richard asked Marilyn, ‘Can I continue to photograph you?’”

She agreed. And what was how Richard got the image of a depressed Marilyn.

Meanwhile, Bob, who had come to stay in Fort Kochi for three weeks, has clocked ten months now. He has been living in big cities like New York and Paris for decades and feels exhausted. “Most cities are loud, stressful and tiresome,” says Bob. “I have never lived in a small place before. Fort Kochi is a small village. It is soft and calm. People smile at you. They say ‘Good morning’ to me. It beguiled me.”

He remembers seeing an accident between a bike rider and a car driver. As the men raised their voices, people hurried up and an amicable solution was quickly reached. “In Los Angeles, pedestrians or other drivers would not have bothered to stop at all,” says Bob.

Now, he is planning to go to Varanasi to take photos using the Holi powder. “I hope to bring out a photo book on the subject,” he says.

(The New Indian Express, Kochi and Thiruvananthapuram)
at February 18, 2020