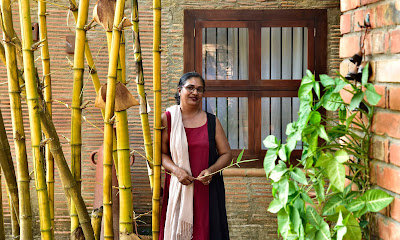 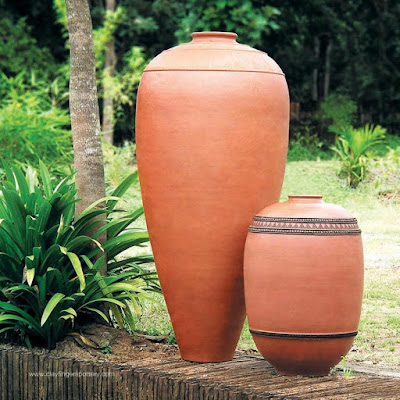 Senior British citizens David Norfolk and Irma Lowe are standing inside a large hall at the Clayfingers Pottery Studio at Urakam, Thrissur. Wearing orange aprons, they learn to make a cup using a pottery wheel. Then using a knife, David etches the letters, Irma, in capital letters at the back of the cup. Irma gives a happy laugh when David shows it to her.

In a brick-walled hall, you can see a wide variety of pottery items: bottles, jars, vases, kettles, cups, mugs, and lampshades which have been neatly placed on several shelves. Outside, there are brick cottages for visitors who would like to stay for a few days to learn pottery. At a distance, there is a huge brick chimney. Beneath it is a large wood kiln.

The studio was set up by artists Haseena Suresh and Suresh Subramanian ten years ago in a ten-acre patch of land. And one of the main reasons was Haseena’s interest in pottery. Even when Haseena was doing her masters in sculpture from Shantiniketan University in West Bengal, she was always looking at the pots.

“This interest is natural for human beings,” says Haseena. “Mankind began their art through pottery from the Palaeolithic and Neolithic Age. Pottery has also been used for cooking, burial and storage. It was very important for human beings for a long time.”

When the couple shifted to Dubai in 1998, Haseena met a British potter called Homa and learned pottery from her. Thereafter, when the couple travelled., they would always visit pottery studios in places like Italy, France, England, Germany, and Canada.

“I began to appreciate the beauty of studio pottery,” says Haseena, who was a panellist at the Talkathon titled, ‘Life For Design’ at the recent Kochi Design Week programme.

Meanwhile, at the studio the process is simple. The clay is put in water for several days. Then it is passed through a mesh so that the impurities remain behind. After that, it is poured onto a bed of Plaster of Paris. Then it is wedged and kneaded, to make it more pliable. Thereafter, the mud is put out to dry.

Then you use a pottery wheel to start making a cup or a vase. After the basic design is formed, there is a curing time, when the item is put out in the sun. Then it is taken to the kiln, where firing takes place.

Following that, the surface is glazed. Only natural minerals are used.

The end products, like terracotta, glazed stoneware and hand-painted decoratives are exceptionally beautiful. “We also have functional items, like mugs and cups, but our focus is on art pottery,” says Haseena. “We want to appeal to those who have an aesthetic sense.”

One of the pioneering artists of art pottery was the Japanese Shoji Hamada (1884-1978). Haseena was much influenced by him. “I wanted to bring Hamada’s philosophy to India where pottery had long been regarded as only a practical craft with no artistic merit,” she says.

So, the studio has been giving training to students from all over India and the world. “Lessons are provided to suit the individual person, regardless of experience,” says Haseena. “Many have gone on to pick up studio pottery as a lifelong passion, working in studios in their free time or even professionally.”

At Urakam, there is a group of freelance potters who work closely with Haseena and Suresh. They were used to making traditional items like cookery bowls, and jars for storing drinking water. “But after receiving training from us they are trying new things,” says Haseena.

As she designs a cup, Haseena says, “I read somewhere that pottery is the new yoga. It is like meditation. Your hands, eyes and mind are focused. It is a centring of oneself. You return to earth through the mud. It is through concentration that the pot comes into being. I want to spread the beauty of this art form all over the world.”
at February 17, 2020