From darkness to a fragile dawn 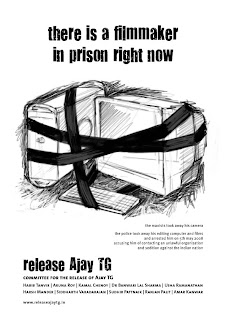 Documentary filmmaker Ajay, T.G., spent 93 days in jail for an alleged ‘contact’ with Maoists in Chhattisgarh. He was released under pressure from human rights organisations. But scores of innocent people, continue to languish in prison under the draconian Chhattisgarh Special Public Security Act

On May 4, documentary film-maker Ajay T.G., 43, stepped outside his house at Aiyappa Nagar in Durg district, Chhattisgarh, to buy milk for his one-and-a-half-year-old son.

Two plainclothes policemen stopped him and said he had to accompany them to the Supela police station. “Can I deposit the milk and come?” he said. The policemen said no and took him to the station. From there, following a stopover at the court, he was taken to the Durg Central Jail. On the way, a policeman said, “You wrote a letter, and that has caused the problem.”

Here is the story of the letter: In April, 2004, Ajay, as cameraman, was part of a People’s Union of Civil Liberties (PUCL) team from Delhi which had come to investigate allegations of fraud in the Bastar, Dantewada and Kanker districts during the Lok Sabha elections.

While traveling in the interiors, the team was intercepted by a group of Maoists who suspected them of being undercover policemen. Ajay’s camera was confiscated and the team was forced to return to Raipur, the state capital.

On July 1, a man delivered a letter at Ajay’s home. It was from the Communist Party of India (Maoists) apologising for the harassment. The Rs 2.5 lakh Canon XL1 camera had been buried in the ground, the letter stated; hence there was a possibility of it being spoiled. Was Ajay interested in getting the camera back or the money?

Asked to whom he should address his reply, the man gave the name of Gudsa Usendi, the spokesperson of the Maoists. In his reply to Usendi, Ajay wrote that he would prefer the camera, but if it was not in a workable condition, he would like to be reimbursed. It was this letter that the police recovered following a raid on Usendi’s hideout in January this year.

“But I am not sure, since no letter was offered as evidence at court,” says Ajay, who was in Kochi recently to attend a human rights convention. So far, no charge-sheet has been filed against him by the police.

Ajay had been arrested under the draconian Chhattisgarh Special Public Security Act (CSPSA). Under the CSPSA, ‘any contact’ with a banned organisation is regarded as a criminal offence. Amnesty International, the International Federation of Journalists, Reporters Without Borders and every civil rights organisation in India has condemned this Act.

Meanwhile, in prison, Ajay slowly got used to the daily routine. Every day, the door of the barracks was opened at 5 a.m. The prisoners stepped out and had their morning ablutions and a bath. “For 250 prisoners, there was just one tap,” says Ajay. “There were always fights and abusive language around the tap. It was difficult to have a bath.” There was no bucket. Instead, a five-litre can, sliced off at one end, was the mug.

“Every day, if I was lucky, I would get about three mugs of water to have a bath,” he says. It had no effect in an area where the summer temperatures hovered around 45 degrees Centigrade.

During the day, the prisoners talked to each other about their cases. It was then that Ajay discovered that there were several innocent people, like him, in jail. One of them was an illiterate tailor. “Somebody had given him an order to make khaki uniforms (which are also worn by Maoists),” he says. “So, the police arrested him.” Ajay came across 74 tribals who had no idea why they had been arrested.

Rajendra Sail, the president of the Chhattisgarh unit of the PUCL, says the first arrest under the CSPSA was a tribal girl, Chandrakanti Toppo, a Class 12 student. She was accused of ‘having illegal relations’ -- to use the term in the police records -- with an electrician, Umesh Prasad Gupta, 28, of Ambikapur town, who was allegedly supporting the Maoists. “Both of them have been released by the High Court, suo moto, on bail,” he says.

Sail says that, according to Chhattisgarh police records, out of 139 people arrested under the act, only 7 are Maoists. “The rest are farmers, tailors, NGO workers, traders, journalists, lawyers, doctors, intellectuals, cultural activists, and filmmakers,” he says.

In July, this year, filmmaker, Amar Kanwar, set up a ‘Committee for the release of Ajay T.G.’. “I had a terrible feeling that Ajay’s case would go the way of Dr. Binayak Sen’s,” he says. (Sen, an internationally renowned public health specialist and the national vice-president of PUCL, had been arrested in May, 2007, on charges of sedition. More than a hundred organisations worldwide, apart from 22 Nobel Laureates, have appealed for his release, but he has been denied bail.)

“It was clear that the Chhattisgarh police was going to stifle any form of opposition,” says Kanwar. “So, it was important for the filmmaking community to respond to Ajay’s arrest.”

Posters and pamphlets were released. Press conferences were held. Eminent people, like Mrinal Sen, Arundhati Roy, Aruna Roy, Habib Tanvir, Harsh Mander, Shyam Benegal and Adoor Gopalakrishnan signed a statement of support. “There was no doubt that because of the pressure brought about by the committee and the PUCL, I was released from prison, on August 5, after 93 days,” says Ajay.

After he came out, Ajay read the newspapers at Raipur and was disappointed by the coverage. “The newspapers described me as the public relations officer of the Maoists,” he says. “The Raipur media is scared of the government and the police, and will publish whatever is told to it. No journalist from any newspaper had asked me for my viewpoint.”

This biased coverage destroyed his social life. His friends and relatives stayed away. “People believe what they read,” he says. Ajay and his wife, Sobha were running a study centre for slum girls. “The local people harassed the volunteers,” he says. The police asked the girls whether they were being taught to make the sounds of dogs barking or cats mewing. “Apparently, the Maoists communicate with each other in the jungles by making these sounds,” he says.

There was further tragedy for Ajay. His younger brother, Anura, 41, who works in Dubai, had wanted to see him in prison. He flew to Kerala to meet some relatives, before seeing Ajay, and died in a car accident at Thrissur on June 19.

Asked about the impact of the arrest on him, Ajay says, “I have lost faith in the Indian state, the government and my country. Before going to jail, I was a courageous person. I felt I had the right to say what was true or false.” Now he has doubts about whether he could continue to live in Chhattisgarh, without being harassed. “Yet, I want to ensure that such a thing does not happen to other people,” he says.

He pauses, as rain falls in torrents outside the window of his sister’s home, looks up and says, “I am ready to die for this.”