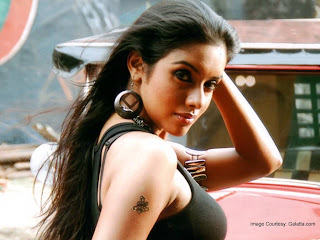 In 2004 Asin Thottumkal was shooting for the Telugu film ‘Gharshana’ at a lake in Nuwara Eliya, a popular hill station in Sri Lanka. Shooting was proceeding on two boats.

Because of fading light in the evening, pack-up time was announced. Asin was sitting at one corner of the boat when she suddenly saw water pouring in. “I am thinking, ‘Hey, this is slightly odd, but, maybe, it is no big deal,’” she says.

The next moment, Asin, who does not know swimming, along with 17 other people, fell into the water as the boat sank. The lake has a depth of 60 feet.

“It was a Titanic moment,” she says. “I remember an assistant director shouting, ‘Somebody please save Asin.’”

As Asin sank, she held her nerve, flailed her arms and legs and managed to come up for breath. It was when she sputtered for breath for the third time that she began to feel traumatised.

“I felt I had reached the limit,” she says. “Suddenly I felt a tug. Somebody was pulling my shirt collar.” The person dragged Asin and pushed her towards the back of the upturned boat.

Asin clambered on and when she looked back, she was surprised to see that it was her own father who had rescued her. “He is a good swimmer,” she says. “When he had seen me go under, he had jumped in. Thanks to him, I have a second life.”

And, thankfully, everybody else was saved. Most had minor injuries, except for cameraman, Raj Shekhar, who, in a bid to save Asin, had jumped in and his shirt got hooked onto a nail of a plank of the boat. He lost balance and, later, consciousness and remained under water for several seconds before he was rescued. “Even now he suffers from a back ailment,” says Asin.

At the restaurant at Allapuzha’s Punnamada Backwater Resort, Asin laughs easily. She is intelligent and articulate, and at 8 p.m. she does not give an impression of tiredness even though she had been awake since 3 a.m. shooting a commercial for Tanishq Jewellery. Asin is the brand ambassador.

Sitting next to her is Alpana Parida, Head-Marketing & Merchandising, Tanishq. “Asin is like a flower,” she says. “She conveys absolute freshness. Through Asin we would like to appeal to a younger generation of women.”

Incidentally, the diamond jewellery market in India is worth an estimated Rs 80,000 crore.

Asin, the diamond from Kerala, was born in Kochi, the daughter of a businessman, Joseph, and a doctor, Seline. She studied in the Naval Public School and graduated in English from St. Teresa’s College.

By the time she was 15, thanks to her photogenic face, she began getting modeling offers. Very soon she plunged in and did about 70 campaigns. Inevitably, she came to the attention of filmmakers and her first role was in Sathyan Anthikad’s ‘Narendaran Makan Jayakanthan Vaka’.

Thereafter she ventured into Tamil and Telugu films and her first hit was the Telegu film, ‘Amma Nanna O Tamila Ammayi’ in 2003. Later, she won a Filmfare Award for the Best Telugu Actress for her role in this film.

In 2004, she had two more hits in Telugu, ‘Lakshmi Narasimha’ and ‘Gharshana’. In Tamil, she acted in ‘M. Kumaran son of Mahalakshmi’. This became one of the big hits in 2004.

The good run in Tamil continued in 2005 when she starred in of the biggest hits, ‘Ghajini’, with Surya. When ‘Ghajini’ was released Asin went to Satyam cinema in Chennai on the first day to see the first show with the audience.

“It was very exciting,” she says. “Instead of watching the film, I observed the reactions of the audience. The audience laughed wherever they had to laugh and cried at the right places. It was then I was able to understand what worked for me and what didn’t.”

In 2006, Asin got a chance to act with Kamal Haasan in ‘Dasavathaaram’ where the star played ten roles. So what is the singular impression that she has of Kamal Haasan?

“It is his passion for cinema,” she says. “He is so knowledgeable about all aspects of filming. What I learned from him is how to have the intensity to go on and on. Look how much he has achieved. And he is pushing the limits all the time.”

Now Asin has moved to Bollywood and has just bought a flat in the upmarket Bandra area. Three films will be released soon: the Hindi remake of ‘Ghajini’, with Aamir Khan, a film produced by Walt Disney, called the ‘19th Step’ and ‘London Dreams’, whose hero is the controversial Salman Khan.

“I found Salman simple and down-to-earth,” she says. “He speaks straight from the heart and that may have caused a negative perception to arise about him in the media.” For ‘London Dreams’, Asin was reportedly paid a fee of Rs 1.5 crore.

Not bad for a 23-year-old from Kochi, with an unusual name. So, what does Asin mean?

“It means purity,” she says. “My parents wanted to give me a name that could not be classified on the basis of caste, creed, sex or religion. And they are right! You have to keep guessing: maybe Asin is a Muslim or a Christian.”

To know more about this bubbly and upcoming actress, check out www.asinonline.com.