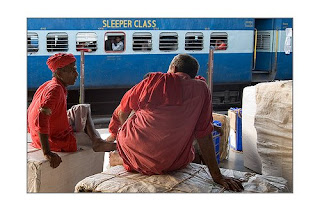 Porters at the Ernakulam railway stations unload goods throughout the day and the night. The job has its financial compensations, but sleep is elusive

A few weeks ago, at 3 a.m., a goods train left Ernakulam North station. Barely had it gone a few metres that it ran over a man who had laid across the track a few minutes earlier. Since there was hardly anybody on the platform, except for a few porters, who were at the far end, nobody had seen him step down from the platform.

"The neck and the legs were sliced off," says porter Raghu Nair, 27. "It was a terrible sight." From the railway police Raghu learned that the deceased was 45 years old and used to work in the Army.

The next morning there was more tragedy. At 10 a.m., a 35-year-old woman stood on top of the bridge near the North station and jumped onto the path of the Venad Express. "Instead of being run over, she was struck by the engine and thrown to one side," says Raghu. "She died on the way to the hospital."

Her lover was getting married the next day. On her palm, she had written his name and mobile number. Apparently, the woman lived close to the station and hence the local people were able to identity her. "We were dumbfounded by what we saw," he says.

These are some of the sights that Raghu sees in his daily job as a porter who unloads goods from the numerous mail and express trains that pass through the station. It is a 24 hour shift: he comes in at 8 a.m. and gets off the next morning. Sometimes, thanks to pending work, the shift extends to 9.30 a.m.

"Every day, we have a busy schedule till 5 p.m.," he says. The job, which has been leased to a private agency, by the Railways, has about 40 men working in alternative shifts. As the train enters the station, six men in the front and six at the back take their places in front of the brake van.

"Usually we have ten minutes to take out all the goods," says Divakaran. "In case we cannot finish, we ask the guard or the driver to give us two minutes more."

The reason for the delay, says Divakaran, is that the goods, for places like Ernakulam, Kottayam, Kollam and Thiruvananthapuram are stored in a jumble.

"Nothing has been demarcated," he says. "We have to get in and search for the items that have to be downloaded at Ernakulam."

Before it was privatised, some of the porters had submitted petitions to the Railways, asking for the goods to be stored in a systematic manner, but to no avail.

A Railway official, who did not want to be named, says, “Instructions have been given to the porters at the originating station to place the goods, which are going to the furthest destination, deep inside, while the material which has to be taken out earlier, should be kept closer to the entrance. But, it seems, the instructions are rarely followed.”

When the goods are unloaded on to the platform, the businessmen will arrive to collect it, in their Matador vans and trucks.

"We get paid according to the particular weight and size of the goods," says Azhar. The income varies from season to season. "During Onam, we earn about Rs 30,000 per month," he says. "This month, we will earn about Rs 9000." Christmas will be a good time, they say.

The goods that are unloaded include clothes, fish, eggs, beef, vegetables, bikes, scooters and newspapers.

The men get a breathing space once the Chennai Mail leaves at 7.30 p.m. Then, apart from a train, which arrives at 10 p.m., they are free till midnight.

"This is the time we try to grab some sleep," says Azhar. "Unfortunately, the menace of mosquitoes is there." And there is also the stink brought on by urine and excreta lying uncollected for hours on the track. "We sleep in snatches," he says.

At midnight, the Malabar Express will arrive. "Following that, there is the Amrita Express and the Chennai Superfast at 1.30 a.m.," says Divakaran. "Then there is another Malabar train, then the Bombay Jayanthi at 4.30 a.m. From midnight, we are working regularly till about 9.30 a.m."

When Divakaran reaches home at Thrissur it is lunchtime and he has a bath, a meal, and then slips off into a long sleep. He awakens in the evening, steps out of the house to meet up with friends, but is back home by 8.30 p.m., has dinner and goes off to sleep. "Half the time at home is spent sleeping," he says.

In order to reach the station next morning on time, he has to catch the 6 a.m. passenger
train.

So, what are the problems of the job? "It's physically tiring, otherwise, there are no hassles," says Divakaran.

Plus, the porters have to contend with the vagaries of the weather. "The monsoon season is the most difficult because we get wet often," he says. "There is no roof near where the brake van stops."

Roof or no roof, the porters carry on, because the battle of survival never stops.

"In an earlier generation, because of this steady income some of the porters have been able to send their children to medical and engineering colleges," says Raghu. "If we are careful with our income, who knows, we could do the same thing for our children."