Scenes from the past 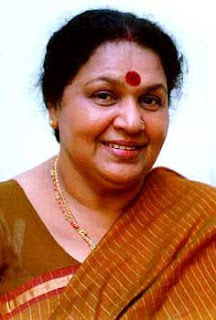 (A series on childhood memories)

Watching Carnatic music legend M.S. Subbulakshmi in performance and becoming a heroine in a play at the age of 13 are some of actor Kaviyoor Ponnamma’s memorable experiences

Every evening Gauri Amma would rub oil on the bodies of her three daughters, Ponnamma, Jagatha and Sarasamma. Then she would send them to a well, at some distance from the house to take a bath.

One day, as Sarasamma sat on the edge of the well, she slipped and fell into the water. “I started screaming,” says Ponnamma. “Thankfully, my mother heard me. Looking back I don’t know whether she ran or flew.”

Gauri Amma jumped straight into the well. Surprisingly Sarasamma had not sunk. “Somehow she had remained bobbing on the surface, even though she was only three years old,” she says. “My mother, who did not know swimming, grabbed her and held on to some plants that were growing along the wall.”

Ponnamma continued to shout. The neighbours saw that she was peering into the well and quickly realised somebody had fallen in. “So they came running with a ladder,” she says. “And that was how my mother and sister were saved.”

But this incident had a lifelong impact on Ponnamma. “Ever since that time I have never stepped into water, be it at a pond, river or a beach,” she says.

Even though Ponnamma was born in Kaviyoor she spent her childhood in Ponkunnam, where her father, T.P. Damodaran had a business. One day as Damodaran took Ponnamma to the town on a Sunday evening through a rubber plantation they heard a girl singing, to the sound of an instrument.

“I told my father we should find out from where the sound was coming,” says Ponnamma. They reached a clearing where a man was playing the harmonium. A fascinated Ponnamma immediately told her father she wanted the same instrument. Damodaran said no.

However, a week later, he bought her the harmonium. Then Ponnamma expressed an interest to learn singing. “Somehow, my father managed to find a guru and I began taking lessons from the age of five,” she says.

One day Damodaran took Ponnamma, who was eight years old, to a concert by M.S. Subbhulakshmi at the Thirunakkara Maidan at Kottayam.

“I stared at Subbhulakshmi in wonder,” she says. “My only thought, as I listened to her perform, was that when I grew up I wanted to sing and look like her: the diamond nose ring and earrings, the big red bindi in the middle of the forehead, and the jasmine flowers pinned in the hair.”

Ponnamma’s own singing debut took place at Kaviyoor when she was 11 years old. It was at this ‘arangettam’ that she got her name.

At that time there was a senior music artiste called Kaviyoor Revamma. The announcer said, “After Revamma it is our little own Ponnamma who will bring glory to our village. And I am sure one day she will be known all over the world as Kaviyoor Ponnamma.”

Ponnamma got her break in acting rather accidentally. In 1958 the Kerala People’s Arts Club (KPAC), with its close ties to the Communist Party, was looking for a young girl who could sing well to act in their drama, ‘Mooladhanam’. A teacher, who belonged to the party, and knew Ponnamma, mentioned her name.

One day when Ponnamma was returning home from school, an Ambassador car followed her. “I ran up the steps of my house and told my mother that some people were coming after me,” she says.

As she spoke, the men entered the house. Damodaran recognised them immediately as KPAC stalwarts -- Thoppil Bhasi, Devarajan Master, Kesavan Kutty and Shankaradi. Since Ponnamma had not seen a film or a drama she had no idea who they were.

They told Damodaran they were looking for a young singer. So Ponnamma was asked to sing a ‘kirtanam’. “They must have liked my singing because they gave me the role in ‘Mooladhanam’,” she says.

Ponnamma learnt the songs and sang it well. However, there was a crisis. The organisers could not find a girl to play the heroine’s part. “I saw people whispering to each other,” says Ponnamma.

Little did she realise that they were planning to make her the heroine even though she was only 13. When Damodaran informed Ponnamma about the decision she began crying. “I felt it would be an enormously difficult task for me,” she says.

However director Thoppil Bhasi told her, “There is nothing to fear. Just follow what I say and you will have no problems.”

And, indeed, she did not have any problems because she showed a natural flair for acting from the very beginning. But away from the public eye, Ponnamma, was, by nature, a loner and an introvert.

And she would think about things that children normally did not. “I would ponder over the meaning of life,” she says. “Where do we come from? Where do we go after death? Why are we here? Why has God created the earth, the animals and the birds? Why did God create us?”

Sitting on the steps of her new bungalow, on the edge of the Periyar river, near Aluva, Kaviyoor Ponnamma, 63, pauses, smiles, and says, “So many questions and, so far, I have not received any answers.”