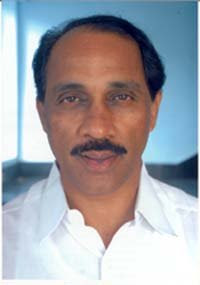 (A series on childhood memories)

Losing his mother at 13 and scoring goals as a footballer were some of politician K. Babu’s unforgettable memories

When politician K. Babu was a child he wrote short stories. A few were published in the ‘Thozhilali’ newspaper. He remembers writing a story about a soldier who was killed during the India-China war of 1962.

“A fellow soldier collected the belongings and took the responsibility of returning it to his wife,” says Babu.

When he arrived at the house the soldier saw numerous photographs of his colleague hanging on the walls. The wife had loved her husband deeply. “I described the feelings of the young wife, who had a small son, and was now suddenly a widow,” he says.

The inspiration for this story came from a real-life incident. Babu’s uncle, Bose, a captain in the Indian Army died in a jeep accident in the district of 24 Parganas in West Bengal.

“His wife was about to give birth to a daughter,” says Babu. “I felt sad when I heard about Captain Bose’s death and decided to write a story.”

Death was not far away during Babu’s childhood at Angamaly. One day his mother Ponnamma fell sick and was admitted to the Ernakulam General Hospital.

“My mother had high blood pressure but the doctors failed to monitor it,” he says. “Suddenly, she started bleeding through the nose and died suddenly.”

His father complained to the former MLA M.A. Antony who raised the issue about the hospital’s negligence in the Assembly.

Babu was only 13 at that time. Thereafter he began living with his uncle, Sreedharan, and aunt, Valliyamma. Barely had he recovered from his mother’s death when one evening, Sreedharan’s son, Salim, was standing at the door of their house at Angamaly when lightning struck. The bolt hit Salim’s face and he was killed instantly.

“I was devastated by these deaths,” he says.

But Babu busied himself so that he could forget these tragedies. He became a member of a children’s arts club. The members met in a room above the sub-registrar’s office at Angamaly.

“When we entered the room we noticed that there was a small door which led to a hall in the next building. Inside, there were numerous empty pots, which had been used to store toddy.”

During the rainy season, because there was no bathroom, the children would piss in these pots. No one would have discovered it except that the old pots leaked and the floor had small gaps.

On the ground floor lived a middle-aged bachelor, on whose face the drops fell when he lay down on his bed. Curious, the man investigated and when he discovered what the drops were, he raised a hullabaloo. “The club was closed down,” says Babu, with a smile.

Apart from the arts, Babu was fascinated with football. He represented his school, St. Joseph’s high school in many tournaments. A stopper-back, he was renowned for scoring goals with his head.

“I cannot forget the time when I headed in a goal at a match in Aluva in the presence of the principal M.L. Paul,” he says. A strict man, Paul used a cane to instill discipline among the students.

“So it was astonishing when this stern man came and rubbed my forehead during the interval,” he says. “He was trying to say that I should score more goals through headers.”

Babu was so passionate about football that when the All India Catholic University Federation organised a football tournament for Christian students, Babu took part by wearing a scapular around his neck.

“Nobody knew I was a Hindu,” says Babu, the Tripunithara MLA, who is also the president of the Ernakulam District Football Association.

Watching films was another form of entertainment, he says. Usually, he would see them with his father’s cousin, Kuttan and his wife, Kaarthu. “Even though I was about seven years old, just to avoid buying a ticket Kaarthu used to carry me like I was a baby,” he says.

When he grew older he would go for night shows. “My aunt, Valliyamma, knew about this but did not say anything,” he says. “I would put several pillows under the sheet to convey the impression that somebody was sleeping on the bed and sneak away. My uncle was always fooled by this.”

But there was a time when he handled a sheet and fell in trouble. In 1966, he had gone on an excursion with his classmates to Bangalore. “We stayed at the Dharmaram College,” says Babu. One morning, as Mass was taking place at the chapel, a nonchalant Babu picked up a sheet and shook it.

In the pin-drop silence the sound echoed throughout the building. “The Rector came running,” says Babu. “The priest could not believe, and neither could I, that I had made the noise just by shaking a sheet. Nevertheless the Rector scolded me.”

Babu pauses and says, “In those days it was so quiet and peaceful unlike the noisy atmosphere in which we live now.”