My parents, my universe 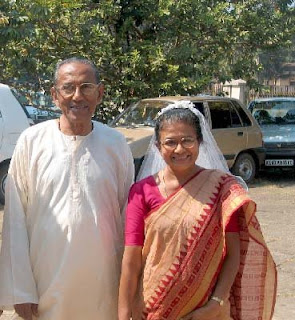 One day, in January, several years ago, my father took me to kindergarten class at St. Xavier's Primary School at Kolkata. As he left suddenly, I started crying, finding myself in a room full of strange children. But my father never looked back.
In 2004, when I took my son to the Greenpark play school at Kochi, I did the same thing to my son, Subin.

However, later, the principal, Indu Madam, told my wife, "We were not sure who felt more sad: the father or the son." So, when my father left me behind that wintry January morning he must have felt sad, but he did not show it. He knew he had to do it: I had to study and grow up and become a man.

And so life went on. I cannot remember my father ever hitting me. I can remember my mother hit me a couple of times, with a cane, but that was all. I cannot remember my parents ever arguing. Years later, when I got married, and had children, my mother said, "Never fight in front of the children. That is what my mother told me." And so, she followed that rule, and I have also done the same.

Here's another memory: when I was seven years old, I attended Sunday mass, with my parents, at the St. Ignatius church at Kolkata. Feeling restless, I ran up and down the aisle. Later, in the car, my father said, "You must not do that!" I took this rebuke very seriously: I have never behaved badly in public. However, years later, when my son ran down the aisle of a church, a few times, I did not scold him.
I was afraid it would remain in his memory for years.

Once, when my mother had given me a bath in our house on Diamond Harbour Road and was taking me to the bedroom, she slipped, and I fell from her hands and glided across the floor. When I came to a stop, I realised I was not injured. I looked back and saw tears in my mother's eyes. I wanted to tell her I was not hurt, but I was tongue-tied in the face of such sadness.

I enjoyed sitting next to my father when he drove the grey Ambassador car. He drove beautifully, with smooth arm and leg movements, and an easy concentration. In the early mornings, he would come to the bedroom, where I slept, with my brother and sister, and pull back the curtains. The sunlight would stream in. I would think to myself, 'It's a glorious day! Good morning and get up'.

Even now, whenever I pull the curtains, in the early mornings, either in my bedroom or my children's, and if the sunlight streams in, I have the same feeling: 'It's a glorious day! Good morning and get up'.

I remember how quickly and efficiently my father would fold the sheets and put the counterpane on it. Within minutes, the bed looked neat and clean. Today, as soon as I get up, I also do the same thing. Then I go to the children's room and do it there also. I feel a deep sense of satisfaction when I do this. I know now why I am doing this: I am honouring my father.

I remember the orange ball which my parents had gifted to me because I had done well in my exams. One evening, while playing in the garden of my neighbour, Rony, the ball fell on some thorns of the bougainvillae plant and burst. It broke my heart, but my mother consoled me. She taught me my first lesson in how to get over a deep disappointment.

My parents, both Malayalis, brought up three children in the city of Kolkata, 2000 kms from Kerala, managing the temporary crises, which afflicts any family, on their own, and, sometimes, with the help of friends and relatives. Now, I have grown up, got married and have children of my own, repeating the role of father and mother which I saw when I was a child.

And, recently, my parents celebrated their golden wedding anniversary. Fifty years of togetherness at a time when marriages are breaking up within three to four years, when there is more lust than love, more selfishness than companionship, more narrow-mindedness than compassion.

What can I, as a son, say now, except bow my head, and thank God for giving me such wonderful parents!

(Article published in the book, 'Congrats: 50 not out! The Golden Wedding Anniversary of Joseph and Ritty Sebastian)