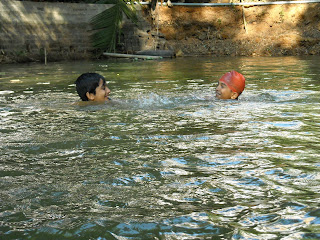 In Edapally, where there are buildings all around, a family has maintained a small pond that belonged to the Edapally Rajas, to teach swimming

When Suchitra was nine years she went to spend her summer holidays with her grandparents in Thrissur. One day she began playing in a nearby pond and nearly drowned.

“She experienced a tremendous fear,” says K. P. Bhaskara Menon of the Life Yoga Centre at Edapally, near Changampuzha Park. “When she returned to her home nearby, she began showing signs of abnormality.”

One day, Suchitra’s father confided his problem to Bhaskara. And the latter said, “The fear of the water can only be got rid of in the water itself.”

In the backyard of Bhaskara Menon’s house is a small pond. For three days Suchitra sat on the steps, too fearful to get into the water.

“Finally, she mustered the courage and stepped in, and I was able to teach her swimming,” says Bhaskara, 70. “Soon, her fears disappeared and she developed an amazing self-confidence. Today, she works in an office in Kochi.”

This incident occurred in 1992 and, thereafter, the pond has been used as a swimming pool for children and college students. The centre gets its members through word of mouth. Most of them come from the nearby buildings, but for the past several years, NCC cadets from Maharaja’s and Bharat Mata College have come for training before their annual camp.

“This natural pond is a rarity in the city,” she says. “There are banana and coconut trees and plants all around. I prefer that my children swim here than in the artificial environment in swimming pools where the chlorine content is very high.”

Thomson Johnson, 27, one of the regulars at the pond, says the only advantage of swimming in a pool is that you can see the depths clearly. “In a pond you have no idea how deep it is,” he says. “But that does not matter if you know swimming.”

The centre teaches swimming, says Bhaskara’s son Suresh, 32, but the primary objective is to impart survival skills, rather than technical perfection. “That means if somebody falls into the water he should be able to save himself,” he says.

With this aim in mind, only three methods are taught: freestyle, backstroke and treading the water or vertical floating. “Freestyle is a fast and powerful stroke,” says Suresh. “But if you need to swim for a long time to reach safety, it is better to alternate it with the backstroke, because with less effort you are able to move forward.”

But since both these strokes are of no use if one were to fall into a wall, vertical floating is also taught. “If you know these three styles you can save yourself if you fall into any kind of water, be it the sea, a river, pond or a well.”

There was some good news recently. A boy, Mahesh, who had learnt the basics at the pond, had gone for a picnic at the Athirampally waterfalls. There he saw a college student slip and fall into the water, and the mother, who did not know swimming, jumped in to save her.

“It was Mahesh who rescued them both,” says Bhaskara.

Suresh has an ardent plea to all school managements. “Learning swimming should be made compulsory for all students,” he says. “In life you will never know when you may be in a situation where you might be in danger of drowning.”

The centre, which also has a yoga and weightlifting section, is surrounded by buildings. So it comes as a surprise to discover a pond in this concrete environment.

Suresh recounts the history: “Apparently, hundreds of years ago, this was a 1.75 acre pond which belonged to the Edapally Rajas. In that period the Raja, the Queen and the members of the royal family would come to the pond to take a bath. It was closed to outsiders.”

Later, when the Rajas faded away, ordinary people began using it. Then it became the place where elephants were given a bath.

But, in modern times, as urbanisation crept in, the pond fell into disuse. Soon it was filled up and the only remnant of this large pond is in the Menon property. The pond measures 25 metres by 10 metres and has a depth of 7 feet, which reaches to 12 feet during the monsoons.

Since there is a natural spring at the bottom the water is replenished daily. “So, every day, we pump out the water into the roadside drain,” says Bhaskara. “Once or twice a week lime is put. It has an effect similar to chlorine.”

However, the water is of a brownish-yellow colour. “You cannot compare it to the clear waters of a swimming pool,” says Bhaskara. “We need to shore up the sides because when the waves hit it, the mud disintegrates and the water gets discoloured.”

Following the conclusion of the evening session, the children leave and the water becomes still. But at one side there is some movement and tiny waves are being formed. A closer look reveals a baby tortoise out on an evening swim.