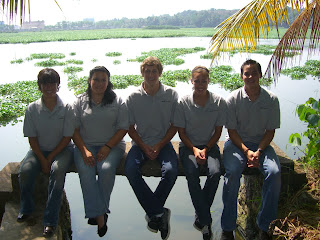 India has one of the highest fatalities from drowning in the world. The members of Swim India, an NGO based in Arizona, came to Kochi recently to sensitise students to the dangers of drowning

“When we went to Cherai beach we were amazed to see that there was not a single lifeguard present,” says Matthew George, 22, an American. “There were so many people around. A lifeguard would have minimised the chances of a drowning. On the beaches in the US, there is a lifeguard tower every 20 feet.”

Mathew is the vice-president of Swim India, an NGO based in Tucson, Arizona. The founder, Benjamin Schaub, 27, while researching on the Internet, came across the astonishing statistics that in India alone, there are nearly 70,000 fatalities every year through drowning.

In contrast, in the US there are only 3,800 casualties. Interestingly, more people drown in south India, with Mangalore having the highest rate of 13.55 -- this is twice the national average.

Last year, Benjamin came to India with a group of volunteers to raise awareness about the issue. They spent several days in Goa training lifeguards.

For Swim India’s first-ever visit to Kochi, last week, the team consisted of Matthew, Jenna Curtis, 21, Shawn Berry, 27, Erin Cox, 21, and Nicole Manuel, 21. All of them work as lifeguards in pools at Tucson.

“We collected the funds for the trip by holding car washes, private swim lessons and fundraisers,” says Matthew. An article on the group in the ‘Arizona Daily Star’ garnered more money. The total collection was more than $20,000.

In Kochi the group held classes for students of several Rajagiri institutions including its public schools and colleges of social sciences, management and engineering.

“We taught skills like how to stay afloat, if you don’t know swimming, by using the clothes you are wearing,” says Shawn. “You pull the shirt up to your nose and blow hard. It balloons up and acts like a buoy.”

There were tips on how to tackle currents. “If you are drowning in the ocean you should move sideways, parallel to the shore,” says Jenna. “When you get out of the rip tide, which is usually about 30 to 100 ft wide, you can head towards the shore. If you swim against the current you get exhausted. If you go along with the current you are taken far away from the shore.”

In the rivers, she says, one should always move feet first with the current. And then when the water becomes calm, a person can find his way to the shore.

The Americans also taught the students the right method to do Cardio Pulmonary Resuscitation (CPR). “Two breaths into the mouth and 30 chest compressions will restart the heart,” says Shawn.

The students reacted with heartfelt enthusiasm. “They memorised everything,” says Nicole. “They showed us how to do CPR afterwards. We thought they were not following what we were saying because of our accents but they recited everything back.”

Milan Mathai Thomas, 21, a student of the Rajagiri School of Management, says, “One of the valuable tips I got was that the next time I went to a river or a lake I should be accompanied by somebody. And both of us should not enter the water at the same time. The course made us aware of the dangers of drowning. We had never paid any attention to this before.”

For fellow student Lincy Mary Thomas, 21, the classes were interactive and informative. “It was also pertinent since 80 per cent of us do not know how to swim,” she says. “I learnt the various methods to save a life. We realised we needed to know some basic swimming skills.”

Erin says that these include learning to stay afloat. “You must know how to kick effectively with your feet,” she says. “Treading water, which means, standing in one place and swimming, is also very important.”

Meanwhile, during a weekend break, the group rushed off to the beach at the Vypeen Islands. And Shawn got busy making a sand castle. “In the US when you are on the beach everybody makes a sand castle,” he says. “But I don’t think this concept is prevalent here.”

An onlooker watched open-mouthed. Soon, there were two, then three, and finally there were about 20 people observing Shawn. “I designed the castle like a scorpion,” he says. “The people looked puzzled. But when they finally figured out what I was doing, they laughed, shook my hand and took photographs with me. It was cool.”

The team was much taken up by the warmth and friendliness shown to them. “I have been to Delhi, Agra and Chennai,” says Matthew. “But compared to the people there, Kochiites are laid-back and happy. And the city is so green and beautiful.”

Says Shawn: “We are keen to come back next year.”

Surprise
In this stage, the victim recognizes danger and assumes a near-vertical position in the water, with little or no leg movement. They rarely make any sound because they are struggling just to breath.

Involuntary Breath Holding
The victim has now dropped below the water line and the body, in an attempt to protect itself, initiates involuntary breath holding. This occurs because water has entered the mouth and causes the epiglottis to close over the airway. Without oxygen, the victim will lose consciousness.

Hypoxic Convulsions
Due to the lack of oxygen, the victim will have hypoxic convulsions. The victim's skin turns blue, especially the lips and fingernails, and the body becomes rigid.

Too many deaths
In South Asia, 80,000 people drown every year. In India alone, one person drowns every 8 minutes!

It only takes the inhalation of 150 mls of sea water to drown.