It’s all about being Innocent 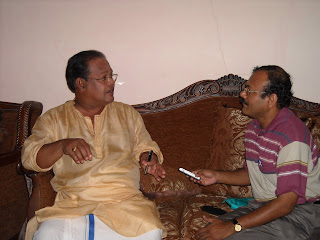 Photo: The author interviewing Innocent at his home in Irinjalakuda

When I first see the actor Innocent inside his sprawling bungalow in Irinjalakuda, he is holding a remote in his hand and staring at a television screen mounted high on the wall. His grandson, also named Innocent, is sitting beside him watching avidly. “He is a crazy Mohanlal fan,” says Innocent Senior. His wife Alice is a gracious host: a plate of cakes and a glass of fruit juice arrives immediately.

Innocent makes the journey into the past with a mix of wit and seriousness, and all sorts of funny facial expressions, just as you see him in the films.

Innocent stood on stage for the first time when he was in Class 1 of the Little Flower Convent High School at Irinjalakuda. “I wore a small towel and there was make-up on my face,” he says. “I played the drums.” Thereafter, he acted in several skits in the school.

By the time he was in Class six, he joined a cultural organisation which staged plays. The rehearsals began only at 10 p.m. It was held at some distance from the house. By the time Innocent returned, it was 2 a.m. “My mind would be full of the scenes that I had acted in,” he says.

However, as expected, the family had a negative reaction. “When I would get up in the morning, I would hear sentences like: ‘At what time did he come in the night? Who knows? He had not come till 1 a.m.’”

Sometimes, his father would say, “In a big family of eight children there will always be one bad apple. And there is nothing to be done about it.”

What made matters worse was that he was a poor student. He failed in Class six, seven and eight. “By the time classmates of mine were doing their MA, I was still in school,” he says. Finally, he stopped studying in Class eight.

But he remained a popular student throughout. “I would imitate people and make my friends laugh,” he says. “Nowadays when I meet old teachers they tell me they knew I was special because children always surrounded me.”

Following his failed academic stint, Innocent tried his hand at entrepreneurship – a shop and a matchbox factory -- but they failed. In 1969, he went to Chennai to try for bit roles.

The first film in which Innocent had dialogues to say was ‘Nrithashala’, which starred Prem Nazir and Jaya Bhaduri. He played a newspaperman, who goes to a carnival in a village and asks questions. “After I did the scene, producer Shobha Parameshwaran Nair called me and said I had done a good job,” he says. But the roles remained paltry and he returned to Irinjalakuda in 1971.

The municipal elections were taking place. At the urging of friends he stood as an independent and won. “But my heart was in acting,” he says. He produced a few films. Some did well, but most failed. The future looked bleak.

Innocent’s turning point came in 1985 with the film ‘Avidathepole Ivideyum’, which starred Mohanlal and Mammooty.

“Mammooty felt I was the best person to play the role of a character who speaks in the Thrissur dialect,” says Innocent.

In the film Innocent is an obsessed businessman who asks a man about the death of his mother. As the man narrates the incident, the businessman has a look on his face that shows his complete lack of interest. “So when the man is talking about the death, the audience laughs, seeing the expression on my face,” he says.

The film failed at the box office but many people called Innocent up and said they liked his acting. Thereafter, Innocent began to get roles regularly, but it was when Sidique Lal’s ‘Ramji Rao Speaking’ became a super-hit in 1989 that he became established as a comedian.

“When I came out of the hall after watching the film with my wife and son, the people surrounded me and cheered,” he says.

A similar experience occurred when he went to see ‘Kathodu Kathoram’ at a theatre at Thiruvananthapuram. During the interval he stepped out to have a soda with director Priyadarshan. “The patrons clapped,” says Innocent. “As we were leaving the hall, Priyardarshan laughed and said, ‘You have become a star.’”

Thereafter, many hits followed: ‘Mannar Mathai Speaking’, ‘Kilukkam’, ‘Godfather’, ‘Vietnam Colony’, ‘Nadodikattu’ and ‘Devaasuram’. Today, he has acted in over 600 films as a comedian, a character artiste, as well as a villain.

Asked the meaning of life, Innocent says fate is pre-ordained and tells a story.

Shiva and Parvati are sitting together. They see a man who had been praying ardently for several days. Their abode, Mount Kailash starts shaking. Parvati says, “He has been praying for so long. Give him a boon and let him go.”

Shiva says, “There is no point. He will not improve. He has a fate like that.”

Nevertheless, at Parvati’s insistence, Shiva puts a cloth bag full of gold coins on the road that the man is walking. It is completely deserted. He is sure to see the bag. But at that very moment, the man thinks, ‘If a man is blind, how does he manage to walk? Let me try to walk like a blind man.’

The man closes his eyes and walks past the bag. Shiva tells Parvathi, “Even if I wished, that man is not going to improve.”