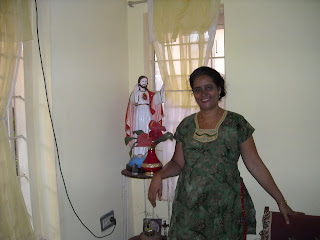 Two weeks ago, a friend called and told me that, following Sr. Jesme, a second former nun, Sr. Regina, had broken her silence and spoken in public about the reasons why she left the nunnery ten years ago. I quickly called Regina up and did a brief telephonic interview. But I was curious to know more about her.

Last Saturday, as I wait at the entrance of Thrissur railway station, Regina drives down in a red Spark. Inside the air-conditioned car, Club FM is playing at a high volume. “I love listening to melodious songs,” she says.

From the station we go to the Ramadas theatre where ‘Pazhassi Raja’ is showing. Regina is a professor of history at St. Aloysius College, and at her urging around 40 students had come to see this historical film. Regina goes to the reservation counter and arranges tickets for all. Thereafter, we go to her two-bedroom apartment at Unity Enclave.

It is neat and spacious, and, as expected, there is a statue of Jesus Christ, placed on a circular stand, at one corner of the living room. Soon, we start conversing.

Regina tells me the decision to leave the convent ten years ago was a right one. “I feel free and happy now,” she says. “I can live life the way I want to.”

This is also one reason why she has not got married. “I did not want to exchange a mother provincial for a husband,” she says. “In Kerala, husbands are too dominating, and only want obedient, docile wives. I am not like that.”

Indeed, Regina gives an impression of being a strong personality. She is 5’8” tall, wears earrings and a necklace, and can easily dominate a room.

“To leave the nunnery, I had the advantage of having a job, but you also need mental strength,” she says. “It is not easy to go against the wishes of family and society.”

One of the reasons she spoke out after so long was because of the impact of Sr. Jesme. “My friends and colleagues told me it was time that I also stepped forward,” she says.

When the 'New Indian Express' published the report of Regina breaking her silence, there was a mixed reaction. Her elder brother, a priest, was upset. An elder sister said, “Why rake up the past now?” But colleagues and friends expressed support.

Shaju, a former student wrote, “When you were teaching us, years ago, all of us felt that you were different, and your talents should not be restricted to the four walls of the convent. So, I am not surprised that you left.”

Regina has varied facets to her personality. She played a cameo as a driving teacher in Sathyan Anthikad’s ‘Innathe Chintha Vishayam’. “I got an opportunity to act and took it,” she says.

In a year, Regina, 54, will be retiring. And she is quite sure about what she is going to work on in future. “Women’s emancipation,” says the woman who set out into the unknown ten years ago and came up triumphant.