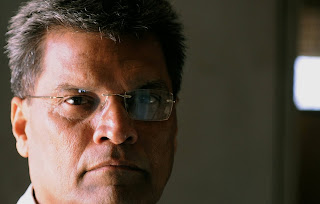 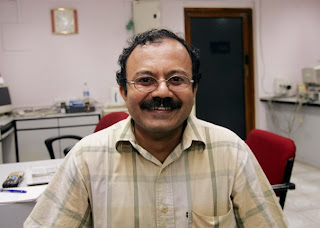 Sebastian D’Souza, who took the photos of Pakistani terrorist Ajmal Kasab killing innocents at a station in Mumbai was a reluctant interviewee. But once he agreed to speak, it turned out to be a gratifying conversation

Picture of the author taken by Sebastian D'Souza

It is rare for a news photographer to be questioned during a trial of a terrorist. But Sebastian D’Souza was summoned to testify, a few months ago, at the special sessions court at Mumbai during the trial of Pakistani gunman Ajmal Kasab.

Sebastian was the only lensman at Chhatrapati Shivaji terminus to take photographs of Kasab walking down a platform, AK 47 in hand, rucksack on his back, nonchalantly shooting down innocent people on 26/11. It was a scoop that made him world famous instantaneously.

When I read the news item about the trial, it triggered a few memories. Three years ago I had met Sebastian in Mumbai while I was doing an article on news photographers.
But, initially, he proved to be elusive. There was no response to my text messages. When I called his office – at that time he was working for the international photo agency, Agence France Presse -- I was told that he had gone out of town on assignment.

But when finally I got in touch he said that he was disappointed by the journalists of today. “They get the facts wrong and misquote people,” he said. “That was why I was not keen to talk.”

I promised I would do a better job and he agreed to the interview. During our conversation Sebastian said he had noticed a disturbing trend these days: the public readily beat up photographers and TV cameramen at the scene of a tragedy.

But he had an explanation for this. “As soon as these young photojournalists arrive at the site they whip out their cameras and start shooting,” he says. “That is why the public gets enraged.”

The correct method is to go in and mingle with the crowd. “You should enquire about what has happened,” he says. “You should also try to help. It is only after that you should start clicking.”

James Nachtwey, one of the world’s leading photographers on wars and disasters in the past twenty years, says the same thing.

“When I approach people I do it with respect and deference,” he says. “I do it slowly and gently and I think about the way I move, the way I speak and the way I use the camera. I let them know I respect them and what they are going through. I could not take my pictures without their acceptance and participation.”

So, maybe, being unobtrusive was what enabled Sebastian to take those unforgettable pictures of Kasab.

When asked whether he was scared, Sebastian says, “I was so engrossed in documenting what was unfolding in front of me that there was no thought of being frightened. In fact I felt very calm since I have had so many years of experience in covering riots and bomb blasts.”

It was a nice answer. So, now, I had to ask the obvious question: “How do you take such good photographs?”

Sebastian smiled, and said, “It’s very simple. You just lift up the camera like this” -- he focused the lens on me sitting two feet away -- “and take a picture.”

This impromptu photograph became a prized possession long before Sebastian became famous. It catches me in a smile, as I actually wanted to laugh out aloud at the way he made it look so easy. I am also surprised that the serious-looking Sebastian has a sense of humour.

And it represents me perfectly: a fun-loving person under a sombre demeanour.

Great photographers are able to capture the truth in an instant.

And Sebastian was no different.