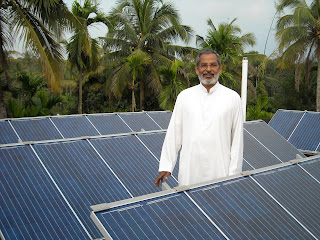 The Mithradham Renewal Energy Center, near Aluva, Kerala, has been running entirely on solar power for the past ten years

At first glance, the red-brick dominated Mithradham Renewal Energy Center, near Aluva town, in Kerala looks like just another well-designed building in the Laurie Baker style. But it is when you step inside and move around that you see unusual things. In the garden, there is a black screen placed on top of a rod. A wire from it connects to a fountain.

“When the sunlight falls on the panel the fountain will work at once,” says Director Dr. George Peter Pittappillil.

On the edge of the property are several lamps, embedded in the ground, at an equidistance from each other. “These lamps absorb solar energy during the day and when it becomes dark, it gives off light,” he says.

On the terrace there are 49 solar panels. They direct electricity towards batteries, which are stored in the basement. This solar electricity is used for lights, fans, washing machines, microwave ovens, refrigerators, electric irons, toasters, computers, and TV sets.

Even in Kerala’s heavy monsoon months of June to September, the solar panels continue to function smoothly. “If we get 20 per cent light it is enough to make the panels work,” says George.

George says the future lies with solar energy. “Within the next fifty years we will run out of fossilised fuels,” he says. “So, we will have to look at renewable energy sources like the sun, wind, water power, wave energy, geo-thermal energy, nuclear fusion energy, and bio-mass. These are inexhaustible sources of energy and will not pollute the environment.”

However, like with all new technologies, the prices are prohibitive today. Each solar panel costs Rs 13,000. If you want to set up a solar energy system for a four-member household you would need at least 30 panels. Total cost: Rs 3.9 lakh.

“When more people start using it, the prices will come down, till it becomes cheap,” says George. “I expect solar energy to gain in popularity within the next fifteen years.”

In Germany farmers are encouraged to put up solar panels on their property. The electricity that is generated is sold to the government and thus is an income provider for the farming community. Scientists in Japan, America, and Europe are toying with the concept of printed solar panels.

“We can buy this, like a plastic roll, at supermarkets, and each will have an electric socket,” says George. So you can insert the switch of the computer into the socket, but the panel has to be placed on the roof. “You can start work at once,” he says.

Incidentally, Mithradham is the first solar educational institution in India. It holds week-long workshops on renewable energy. Usually, an expert from Germany delivers the lectures. “I have a close association with many German institutions, because I did my post-doctoral studies in nuclear physics at the Max Planck Institute at Stuttgart,” says George.

He says that Indian engineers have plenty of theoretical knowledge, but lag behind in practical experience and are unable to come up with innovative applications. “There were quite a few occasions when the German expert has asked questions and the local engineers were unable to answer them,” he says.

Apart from workshops, students from all over Kerala and Tamil Nadu also come for a sensitising process on the benefits of solar energy. There is a ninety-minute audio-visual presentation, followed by a tour around the campus, to show how the various equipments worked.

“Man loses something when he does not live in close contact with nature,” says George. “It disturbs him on the physical and the psychic level. Apart from that, we live with severe air, water, and food pollution. If we continue like this for another hundred years it is going to be dangerous for the whole of humanity. We have to stop this trend.”

George has taken the first step. And it is clear that for our own good we should also follow him down the solar energy path.