Kerala under the microscope 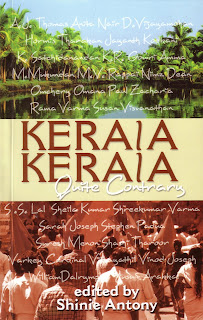 An interesting anthology focuses on the myriad aspects – political, economic, social, cultural and literary – of God’s Own Country

‘The Malayali, who boasts of being intellectually superior to others, has made some of the biggest historical blunders. I remember a strike against tractors when they were introduced in paddy fields. Almost all political parties opposed it, saying that it would make the labourers jobless and lead to more unemployment and poverty. Now when paddy fields are being converted for purposes other than farming and there is a shortage of farm labourers, the Malayali looks at Tamil Nadu or Andhra Pradesh for rice’. Thus wrote D. Vijayamohan, a senior Malayala Manorama journalist about some of the follies committed by Malayali politicians.

Vijayamohan also writes about the opposition to the modernisation of the coir industry, which led to its collapse, and the angry response when computers were first introduced. This attitude resulted in a moribund economy for decades and forced lakhs of Malayalis to migrate to other states or abroad in search of jobs.

This essay, ‘The Argumentative Malayali’ was published in ‘Kerala Kerala, quite contrary,’ an anthology ably edited by author Shinie Antony and published by Rupa & Co.

It is a mix of fiction, essays on literature, analysis of the people and the state, reminiscences by senior police officers and politicians, a look at the rich cultural heritage, an introduction to the low-profile Anglo-Indian community, and a moral analysis by the leader of the Syro-Malabar Church, Cardinal Varkey Vithayathil.

The Cardinal, known for his honesty, says, “The recent crisis in priestly celibacy cannot be considered in isolation. The ills are symptomatic of serious sexual indiscipline and moral chaos in general.”

Hormis Tharakan, a former Director-General of Police writes about the law and order chaos that rocked Kerala in the seventies and eighties. He details the murder by Naxalites of landlord Kongad Narayanan Nair, the infamous Rajan case, when the engineering student died in police custody, and the killing of Naxalite leader Varghese. Tharakan writes lucidly, looking at these events from the police’s point of view.

In contrast, K.R. Gowri Amma, the veteran Communist leader and the only woman in the first Communist government in Kerala in 1957, talks about her torture at the hands of the police. While being taken from one ward to another, in Central Jail, Gowriamma heard cries from the ward where her male comrades were locked up.

“When out of curiosity I ran towards that cell, the policemen beat me up badly,” she writes. “I bit a policewoman’s wrist and they all climbed on my stomach and stamped on it with boots. I fought back till all went black.”

Most of the pieces are only a few pages long, including the short stories, and it makes for an easy read. The fiction provides glimpses of the inner life of Malayalis.

‘The Countryside’ by M. Mukundan showcases the clash of cultures, when a young Westerner comes to a village in Kerala, impregnates a girl and leaves without a care in the world. The father and the daughter are devastated by this development, and the girl waits vainly for the man to come back and marry her.

Meanwhile, William Dalrymple’s ‘The Strange Sisters of Mannarkad’ is about spirituality. He writes about a village where the inhabitants have been worshipping the Goddess Bhagavati as well as the Virgin Mary for a few hundred years. Says the head priest of the temple, “Yes, yes, the Virgin Mary is Bhagavati’s younger sister.”

While women are deified in Mannarkad, in the play, ‘Silent Cats’, writer Omchery brilliantly depicts what many people may not know takes place often in Kerala: female foeticide.

Overall, it is an interesting anthology, which will be unputdownable for Malayalis who live in and outside Kerala.