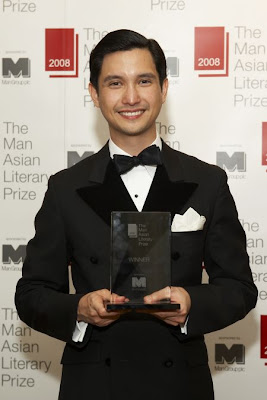 Writer Miguel Syjuco, who won the 2008 Man Asian Literary Prize, talks about how the win changed his life


In 2007, Filipino author Miguel Syjuco submitted a manuscript for the Man Asian Literary Prize. “I was confident of doing well but, unfortunately, I did not even make it to the long list,” he says. So, he took the book apart, deleted characters, re-wrote it and made it into a different novel. In 2008, Miguel submitted it again, hoping that it would appear on the long list so that agents could get interested in his manuscript.

“I had already spent years looking for an agent,” he says. Thankfully, Miguel’s name did feature on the long list. “Then I thought it would be nice to get on the short list,” he says, with a smile. And when that happened, he was invited to go to Hongkong for the prize-giving ceremony.

“I thought I would have some dim sum, get drunk, and lose as gracefully as possible,” says Miguel. So imagine his surprise when he ending up winning the 2008 Man Asian Prize. “Everything changed for me after that,” he says. “I found an agent and an editor who spent a year making the manuscript better.”

This became the novel, ‘Ilustrado’. It traces the life of Crispin Salvador, a famous Filipino writer, who ends up being murdered and dumped into the Hudson river, near New York.

Another strand explores Crispin's writing class student at Colombia University, a character called Miguel Syjuco, who is on a search to find out what actually happened to Crispin. “The Miguel in the book is completely different from me,” says the author. Incidentally, it is not a novel in the conventional sense: there are Crispin's short stories, memoirs, letters, jokes, newspaper articles, e-mail messages, and blog entries.

Because of this, some critics described ‘Ilustrado’ as a post-modern novel. Miguel rejects the term and says, “Post-modernism is an easy way of explaining works that are unconventional. I don’t think my novel is post-modern at all. In fact, it is contemporary. Today, we perceive reality though different sources: the TV, mobile phone, internet, radio, Facebook and Twitter. This has not been reflected in literature, and I wanted to show that.”

By the way, the word ‘Ilustrado’ means 'enlightened' in Spanish. It refers to a group of young men, who, in the late 1800s, left the Philippines to study in Europe, mostly in Spain. With their European education, they returned, and played a key role in the Philippine revolution of 1896, which overthrew the Spanish.

Not surprisingly, the novel is a best-seller in the Philippines. “It has struck a chord among readers, because it articulates the anger and frustration that we often feel,” he says. “It is also a window into the privileged class. Nobody in the Philippines has written about them yet. It is also different from most Filipino writing, which is earnest and serious. My book has all that, and I like to think it is funny and entertaining, too.”

Today, Miguel lives in Montreal as a full-time writer. “It is like owning your own business,” he says. “You have to be disciplined and focused. It means that, unlike other jobs, you are always working, thinking, and letting the ideas for your next book develop in your head. It does stress me out, but working 9 to 5 is also tiring.”

But Miguel also admits that he misses the job of a journalist. Earlier, he had worked in newspapers in Australia and the USA, including as a fact-checker in the prestigious literary magazine, 'The Paris Review' at New York. “Journalism enabled me to meet all sorts of people,” he says. “Writing, by nature, is a solitary profession.”

At the Hay Festival in Thiruvananthapuram, Miguel is dressed stylishly in a pinstripe blue suit, a bluish-red handkerchief tucked fashionably in his breast pocket, and white shoes. He is unfailingly polite and charming and the noonday heat leaves him undisturbed. He does not perspire at all, despite his formal clothes.

Miguel is excited, because this is his first visit to India. “As soon as I exited the airport, I experienced the same dynamic pace, and the same warmth in the people, as it is there in the Philippines,” he says. “We seem to have the same social problems and colonial history. I felt at home.”