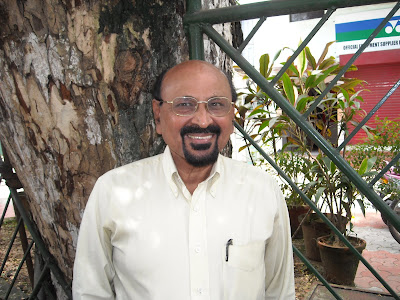 On October 25, 2008, educationist John Joseph published a supplement in the New Indian Express newspaper. “It explained the concept of positive thinking,” says Joseph. There were articles on how countries like the United States, Japan and Europe became successful because they are positive-thinking people. “I decided to publish because I noticed that the people of Kerala have a negative mind-set,” says Joseph.

The articles struck a chord. Several readers called him up. Among them was Anto Varkey, the former General Manager of the BPCL Kochi Refineries Limited. “When I read the supplement, I realised that this is something that is needed for Kerala,” he says. “I told Joseph this is a good movement.” Soon, a meeting was arranged, and thus was born the Positive Thinking Movement.

“In Kerala, if you put forth a proposal, several people will trot out excuses about why it will not work out,” says Varkey, who is the vice-chairman of the movement. “In the end, the project is killed.”

This is going on at all levels of society. “This happens between children and parents, students and teachers, managers and subordinates,” says Varkey. “At every stage, there is a negative discussion going on. In fact, there is an over-analysis of everything. It leads to paralysis.”

Suppose a person is asked to cut a tree. “He will say the axe is not sharp, the weather is not good, the tree will block the road, or it will fall on the electricity wires,” says Varkey. “This is the mind-set of most Keralities.”

The Positive Thinking Movement has more than 120 members. There are doctors, engineers, chartered accountants, academicians, and businessmen. Chapters have been established at Tripunithara, Fort Kochi, Aluva, Vypeen, and Alleppey. And they have started courses in positive thinking. “So far, we have covered 30 schools in Ernakulam district,” says Peter Fernandes, a vice-chairman. “The participants have been principals and teachers.”

In one module, teachers are asked to find out, within a few hours, the total number of teachers, students and schools in Ernakulam district. “The immediate reaction is that it is not possible to get the information so quickly,” says Fernandes. “Then I will tell them about the principles of Benjamin Franklin, the great American polymath.”

According to Franklin, to programme the mind there are only four steps. In the first step one should say, “It can be done.” Second statement: “It will be done.” Third: “It should be done.” Fourth: “Find the ways and means.”

“When a teacher says it is not possible, the doors of the mind become shut,” says Fernandes. “Your creativity, ingenuity and openness are suppressed. But suppose you tell yourself it can be done, it will be done, it should be done, and I must find ways and means, the mind will immediately look for solutions.”

Soon, one teacher will say the e-mail can be used. Another will suggest a telephone directory or to get in touch with the education directorate's office. “In the end, by 5 p.m., the information can be got,” says Varkey. “The fight in the mind is between possible and impossible. Our minds are always tuned towards the impossible. On the other hand, if we are positive-minded, we will start looking at possibilities, and solutions.”

Asked how this negative mind-set has developed among Malayalis, Varkey says, “One possible reason could be the impact of Communism. It is an ideology that is against new ideas and projects. It is against growth and capitalism. Communists oppose for the sake of opposing. However, psychological studies have to be done to confirm this.”

Meanwhile, the Positive Thinking Movement is planning to spread its message all over Kerala. “We want to create an atmosphere where if somebody comes up with a new idea, there will be applause and receptiveness, instead of derision and inertia, as is the case now,” says Varkey.