“Art is a passion for me” 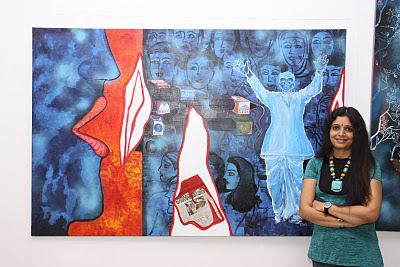 On a recent Friday evening, the atmosphere at Bindhi Rajagopal's art gallery in Kochi is homely. There are youngsters running around in the garden. Two are Bindhi's own children, Sowparnika, 12, and Malavika, 10. After a while, her cousin, the actress Poornima drops in, with her two children. And while the two women are having an intense chit-chat, visitors make their way silently to the first-floor gallery to view 'Root', an exhibition by students – AR Anagha, Ashil Anthony, Ebby Eddasery, Mona S Mohan and P Ramesh - of the RLV College of Music and Fine Arts.

The space for the gallery had been willed to Bindhi by her late father, P.R. Chandran, while her mother, Shoba Rani, stays on the ground floor. Asked why she opened one, Bindhi says, “There is not enough space in Kochi for artistes to display their works. We have only four reputed galleries: Durbar Hall, Kashi, David Hall and Chaitanya, and they are always booked. Most of the time, the gallerists select artistes who have reached a certain standard. There are no opportunities for beginners. That is one of the main reasons why I decided to open a gallery.”

In fact, because of this pressure for space, Bindhi held her first solo exhibition in 2006, ten years after she graduated from RLV College. “That was how difficult it was for me,” she says. But when she initially proposed the idea, her parents and businessman-husband, K.R. Rajagopal, were not very supportive. “My father and mother wondered whether people would drop in, because the gallery is in a residential area,” she says. “My husband was worried about the expenses.”

So Bindhi decided to withdraw her entire provident fund – she works as an art teacher in the Gregorian school – and used it to set up the gallery. It was inaugurated on December 8, 2010. And in these 13 months, she has held 13 shows. If it is a curated show, she gets a 30 per cent commission if a painting is sold. Otherwise, she gives it out on a daily rent.

“I am just about breaking even,” she says. “The main problem is that society is not much aware of art. People are more interested in going for a flower show, handicrafts or cloth exhibitions, rather than come for an art show.”

Initially, Bindhi had a trying time to establish the gallery. “Many senior artistes were not keen to display their works,” she says. “They prefer a reputed gallery. When I put up my first group show, I did not get the works of senior artistes.”

But things changed when she began to get media coverage. “Society believes what the media says,” she says. “For art media is essential. Those who puts up shows in my gallery, they urge me to organize the press coverage. It is a strain for me, as I have to go and meet the journalists at their offices. When an article appears in the newspaper, the relatives read it and the artistes are happy about the recognition. They don’t want the paintings to be sold. They just want a stage to perform. And get appreciated. And nowadays, that is done through the media.”

But it is not that Bindhi gets praise all the time. “When you hold an exhibition of artistes of the same calibre, those who are left out feel angry,” she says. “I have had many bad experiences. Some artistes come up and say in an accusing tone, 'Why have you forgotten me?' There is nothing deliberate about the oversight, and I promise them a chance at the next exhibition. But this particular artiste is so angry he or she is not willing to take part again.”

Meanwhile, one of Kerala’s senior-most artistes, C.N. Karunakaran says that the gallery has every chance of continuing to do well. “It is her own space, so she does not have to pay rent,” he says. “Most galleries have to pay high rents and the returns are not that good. That is one reason why galleries had to close down in the past. Bindi is an artiste herself, so she is not focused only on making a profit. Plus, she has good contacts.”

Yes, with the help of her contacts, Bindhi is ploughing ahead. “Art is a passion for me,” she says. “The organisers of the Kochi Biennale have expressed an interest in holding exhibitions in my gallery. So I feel happy about that.”