A confluence of dazzling international art 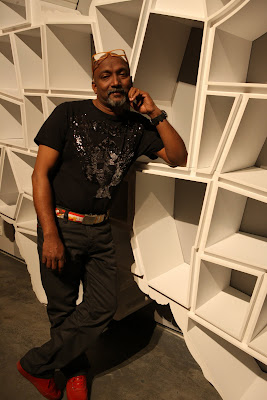 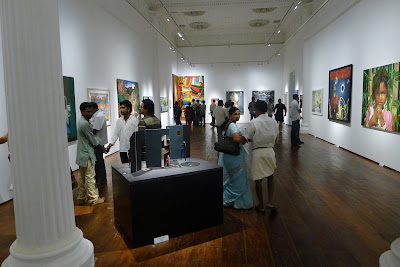 
Painter Bose Krishnamachari, dressed casually in a blue T-shirt and jeans, looks serene even as work is going on at the gallery at the Durbar Hall in Kochi on a cloudy day. So workers are banging nails into planks, a photographer is taking shots, while harried assistants come to Bose to get solutions to last-minute hitches. The gallery was inaugurated by Chief Minister Oommen Chandy recently. He described it as 'Asia's best gallery'.

As the director of the Kochi Biennale Foundation, it has been Bose's desire to transform a 150-year-old gallery in the centre of Kochi to a world class one. “It has taken 14 months of work,” he says.

He wanders around the open spaces, points at the walls, and says, “These are fire-proof Hilux sheets, which have been pasted on to the old walls. On the ceiling, there are ERCO LED lights, which is the world's best lighting technology, and used for the first time in India.” There are four galleries, the ones on the ground floor at a height of 11 ft., while on the spacious first floor, there are 18 ft. high walls. What looks attractive is the polished wooden floor and and the high ceiling.

“We have ensured that the original structure has been kept intact,” says Bose. Well-known architect Radhika Desai, who has worked with the Victoria and Albert Museum in London, as well as Vikas Dilawari, who won an UNESCO award for his conservation work at the Dr. Bhau Daji Lad Museum in Mumbai, provided valuable inputs.

“We had to be careful about the moist, and hot weather conditions in Kerala, particularly when working with the laterite stone which is like a sponge that sucks in the moisture in the atmosphere,” says Radhika.

To refurbish the gallery has cost Rs 3.5 crore and the funding has come from the State Government. “The Centre, as well as institutions, corporates and individuals have also chipped in,” says Bose.

The Mumbai-based painter has big plans. He wants to set up a Biennale -- an international art exhibition -- which will showcase the best works of Indian and international artists, and will be displayed all over Kochi, in cultural institutions, museums, academies, with the centre being the Durbar Hall gallery.

“If you look at the history of biennales the world over, it is the meeting place for creative exchanges between nations and cultures,” says Bose's fellow director Riyas Komu. “It is an important platform for critical artistic debate.”

The first biennale opened in Venice in 1895 AD. At present there are more than 150 biennales all over the world. The most noted are the ones in Venice, Sao Paulo, Liverpool, Lyon, Istanbul, Havana, Guangzhou, and Sydney. “Every other year there are new visions and developments in art,” says Riyas. “The host city is the only constant.”

The Kochi Bienalle is expected to kick off in a few months time. Meanwhile, the selection of the art works will be done through consultation with globally-reputed curators, artists, gallery-owners, museum directors, institutions, and cultural ambassadors. “We will be doing extensive research to get the best,” says Bose. “Whenever we talk about Kochi and the Indian biennale, it excites everyone in the art world!”

Interestingly, many Indian artistes have taken part in the Biennales in other countries. Recently, Subodh Gupta, Nalini Malani, Dayanita Singh, Anju Dodiya and Riyas have exhibited in the Venice Biennale. Says Bose: “It would be a moment of great pride to bring all these eminent artists together in a Biennale in our own country.”