“He is an instant story-maker” 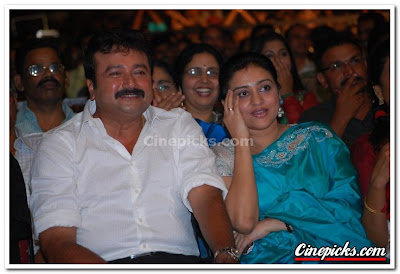 Parvathy talks about life with Jayaram, one of the most popular actors in Mollywood

When actor Jayaram saw Parvathy for the first time during the shooting of his first film, ‘Aparan’, at Udaya Studio in Thiruvananthapuram, in 1988, he stood up in respect. Parvathy was the senior artiste. She was accompanied by the veteran actress Sukumari.

Parvathy said, “It's okay, please sit down.” They began talking. Parvathy told Jayaram that she had already seen a mimicry cassette of his, brought out by the Kalabhavan. “I liked his acting but he was also handsome,” she says.

It was during the shooting of ‘Puthiya Karukkal’ in Thekkady in 1989, that things got serious. “We went to sing Christmas carols in the neighbouring houses for fun,” says Parvathy. “[Actress] Sithara and I wore the Christmas father's costume.”

An excited Jayaram jumped on top of the mobile van and started dancing. “I said if you fall I would have to look after you and I don't have the time for that,” says Parvathy. “However, soon, we expressed our feelings for each other.”

And despite an initial family opposition, they got married on September 7, 1992, at Guruvayur temple. So what sort of a husband is Jayaram?

“He is frank, transparent, and a family man,” says Parvathy. “For any trip, be it domestic or foreign, he will always want the family to come along. And if for some reason we are not able to go, he will cancel his trip.”

When Jayaram goes home, to Chennai, he will insist that the children – Kalidasan, 18, who is studying for a degree in visual communication at Loyola College, and daughter, Malavika, 15, who is in Class 10 at Padma Seshadri Bala Bhavan school -- take leave, so that he can spend time with them.

“I am against this, but I realize he comes home so rarely that I allow it,” she says. “He takes good care of the children and me.” This is evident from the fact that Jayaram calls Parvathy a minimum of 30 times a day. “Usually when husbands go to work, they rarely call their wives, but Jayaram is an exception,” says Parvathy. “Any decision he has to make, he always calls me, to get advice.”

As for his negative traits, Parvathy says, “Jayaram always finds it difficult to say no. At times, this does affect his career.”

Sometimes, during shoots, if something happens which disrupts the work, he can get irritated. “For example, if somebody is late for a shoot,” says Parvathy. “However, most of the time, he is a jovial and fun-loving person who cracks a lot of jokes. His co-actors say that they laugh so much because of his wit and charm. You will never get bored when you are with Jayaram. He will come up with new wisecracks all the time. He is an instant story-maker. At home, I am the butt of all his jokes.”

But Jayaram is rarely at home. Except for the month of May, which is when he takes his annual vacation, so that he can spend time with the children, he is constantly shooting for one film or the other. “Jayaram might come home for one or two days,” says Parvathy. “Sometimes, it is for ten days, if a shooting is cancelled, but that is rare.”

So Parvathy is used to spending a lot of time on her own. “I handle all the responsibilities, like running the house, raising the children, and looking after the finances,” she says. “When I was younger, I would feel a bit of pressure. But now I enjoy the superwoman role. When I solve problems, I feel a sense of fulfillment.”

Of course, after her marriage, Parvathy has stopped acting, but says she has no regrets. “One spouse has to sacrifice their career, otherwise, it will be difficult to bring up the children properly,” she says. “If there is a good salary earned by the husband why should the wife work?”

Meanwhile, the one quality that the family has learned from Jayaram is how to interact with strangers. “I am an introvert and tend to keep aloof from people,” says Parvathy. “But it is only after my marriage that I have learnt to interact more. And so do my children. Jayaram's love for people is his best quality.”