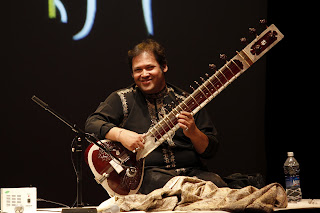 Sitar maestro Pandit Prateek Chaudhuri, of the senia gharana, kept an audience spellbound at the JT Pac, Kochi. Pandit Mithilesh Jha accompanied him on the tabla

Before he begins his sitar recital at the JT Pac, Kochi, Pandit Prateek Chaudhuri makes a statement. “We must promote our own culture,” he says. “We are now surrounded by a vicious cycle of Western music. It is a sad state of affairs, especially in north India. The JT Pac is one of the few organisations in India doing wonderful service to promote our culture. Kochi will always remember its contribution.”

Thereafter, Prateek begins the concert with the raga Jhinjhoti. “It is a romantic raga,” he says. In the senia gharana, which was named after Mia Tansen (1506-89), the doyen of Hindustani classical music, they use the Dhrupad style, the purest form of music. As he starts strumming the sitar, Prateek says, “You can enjoy the alaap with your eyes closed.” As some members of the audience do so, tabla player Pandit Mithilesh Jha occasionally nods his head in appreciation.

Thereafter, the duo moves into the Raga Bihag. Following that, Prateekji plays the 8 ½ beats cycle, which is difficult to perform. After a while, both the sitar and the tabla are in conversation and it is fascinating to watch.

“It is a dialogue that I had with Mithilesh,” says Prateek, after the concert. “Sometimes, he plays his part and I play mine. At other times, I ask a question and he replies. We wanted to display our creativity. There were no rehearsals earlier. Mithilesh did not know what ragas I was going to play. He had to respond spontaneously to what I was doing.”

In this friendly contest, it was interesting to see Prateek’s facial expressions. Sometimes, he had a frown, on other occasions, he grimaced, and many times he gave encouraging smiles to Mithilesh. There were moments when his body shook with the effort. “Each artiste has his own individual style,” he says. Playing at electrifying speed seems to be Prateek’s forte.

The musician is the son of Pandit Debu Chaudhuri, a Padma Bhushan, and learnt the sitar from his father, as well as the latter’s guru, Ustad Mushtaq Ali Khan Saheb. “I gave my first concert at four years of age,” says the 40-year-old. Prateek is the ninth generation of musicians belonging to the senia gharana, which began with Ustad Maseet Sen, a relative of Mia Tansen.

The peculiarity of this gharana is that it uses 17 frets on the sitar, unlike the 19 – 21 frets which are there in other gharanas. Interestingly, despite the impact of the British rule, no note had been changed in the senia gharana for 200 years.

But Prateek has adapted himself to change. In order to attract the young, he has started two groups: Sitar Ecstasy, and Sitars of India.

“I have used the fusion route, playing alongside drums, keyboards, the piano and western percussion instruments,” he says. Apart from this Prateek, who has a doctorate in music, is also an associate professor in the same subject at Delhi University. So, he is in the unique position of being a top-class academician, as well as an artiste.

At the JT Pac concert, the recital reaches a climax. For a full five minutes, Prateek is in full flow, playing the strings at high speed, while Mithilesh ably keeps up with him, forming a mesmerising wall of sound. Not surprisingly, the audience gives them a heart-felt applause at the conclusion.

Says Prateek: “People are afraid to listen to classical music because they are not exposed to it. But our music is like a drug. Once you taste it you don't want to give up on it.”