‘Sibi is a good person at heart’ 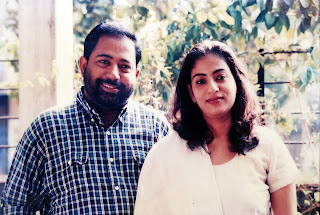 Bala speaks about her life with noted director Sibi Malayil

In 1988, Bala was working in the Anna Nagar branch of the South Indian bank at Chennai. Since film producers were customers, they would sometimes invite the bank staff to see preview shows. “That was how I was able to see 'Thaniyavarthanam',” says Bala. “I was much impressed and developed an admiration for the director, Sibi Malayil.”

A few months later, Bala came to Kerala for a vacation. While there, she saw Sibi's next film, ‘August 1’, at Saritha theatre in Kochi, along with her sister, Beena. As the credits began to roll, Beena told Bala that they had received a marriage proposal from Sibi's family.

Soon, Bala returned to Chennai. Thereafter, many proposals came and she said no. “I wanted to marry Sibi,” she says. “My father was not agreeable, because of the negative image of the film industry. My mother asked why I was so insistent. I said I had no reason, but just wanted this alliance to come though.”

At 4 p.m., on December 26, 1988, Sibi and Bala met for the first time. The director collected Bala from her Chennai office and they went for a cup of coffee at a nearby cafeteria. “Sibi told me that because he was in the cinema world I would hear all sorts of gossip,” says Bala. As Sibi spoke Bala never felt that she was talking to a stranger. “It seemed to me as if I had known him for a long time,” she says. Later, they travelled on a public bus towards Bala’s hostel. At the gate, Sibi said, “So what have you decided?”

Bala said that she would give the answer later. The next day she did not call. Her close friend and hostel-mate Geeta asked Bala why she was delaying. Geeta said, “You should not lose him just because you did not call.” On December 28, Bala called up from the bank, but Sibi was unavailable. He called Bala in the evening and said, “Why did you call?” Bala replied, “You must be knowing the reason.”

Sibi and Bala got married on March 27, 1989 at St. Mary’s Basilica, Kochi. So, after 23 years of marriage, what is the character analysis of her husband? “Sibi is a good person at heart,” says Bala. “He rarely gets angry and will never bring the problems on the set back home. He is a good father and a husband. We always had a nice time, even though films are Sibi’s passion and livelihood.”

Of course, like any person, Sibi has negative points. “He cannot say no to anybody,” says Bala. “Somebody will come and ask for money, promising to pay back within a week, and Sibi would never get it back. He would also never enquire about the loan. I would ask him why he was doing this. As a director he would not get the full amount from the producers and Sibi would keep mum regarding the arrears.”

One reason could be because Sibi has an artistic inclination. “That is why he is not a good businessman,” says Bala. “Sometimes, he will be in his own world. When I talk to him, he may not hear me. Instead, he will just stare at me. In the early years, I would get angry. Then I realised that it is his nature.”

One of Bala’s unforgettable moments took place in March, 1990. She did a pregnancy test at KHM Hospital in Chennai. In the evening, the couple went to collect the test report. “Sibi asked me not to open the envelope,” says Bala. “We got into the car and drove on till he stopped under a huge tree in Anna Nagar.” Sibi opened the envelope and the report had one word, which sent their hearts soaring:  ‘Positive’.

When they went home and Bala opened the bedroom door she got the biggest surprise of her life. “The walls were covered with baby posters,” she says. “It was an unforgettable moment for me. We had prayed very hard for a Christmas baby. And my son, Joe, was born on December, 27, 1990.” Later, they would have a daughter, Zeba.

While Joe is doing a bachelor’s course in photography from the University of Middlesex, England, Zeba is doing her architecture degree from the Hindustan University of Technology and Sciences at Chennai.

Meanwhile, when Bala is asked whether she would have been happier marrying a bank officer, a look of horror comes on her face. “It would be so boring,” she says.