In tune with each other 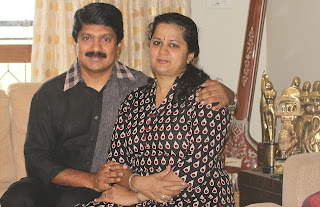 When singer G. Venugopal decided to get married, he gave out a few horoscopes. One was given to classical vocalist Mannur Rajakumaran Unni. Venugopal, a programme executive at All India Radio at Thrissur, met Unni through his job. Meanwhile, Unni was a family friend of Reshmi. So he gave them the horoscope. Reshmi’s and Venugopal’s horoscopes matched. So, a meeting was set up at Unni’s house. At that time, Reshmi had just completed her BA in English literature at Little Flower College at Guruvayur.

“My first impression of Venu was that he seemed to be an okay guy,” says Reshmi. “During our conversation he asked me about how many marks I had scored in my degree exams. So, it was all very unromantic.”

Anyway, the families agreed to the marriage, and the couple tied the knot on April 8, 1990. And it seemed to be the right match because they got along well from the beginning.

“Venu is patient and ever willing to listen,” says Reshmi. “He is positive-minded, sensitive, and understanding. If I am in a low mood, he is able to sense it immediately.”

If Reshmi has a complaint about her spouse, it is his too-trusting nature. “As a result, he has been cheated a few times,” she says. “On the other hand, I am careful. When I see people who are not trustworthy, I will tell Venu immediately. Sometimes, he listens to me, sometimes he does not.”

Venugopal has a busy career, so it was not surprising that one of Reshmi’s happy moments occurred when they went for a holiday to the Maasai Mara National Reserve (a safari park) in Kenya in October, 2012. “Usually when you go to a foreign country you go to see the tourist sites,” says Reshmi. “But this time we saw a lot of animals and came in close contact with the members of the Maasai tribe.”

They spent a week together accompanied by their daughter, Anu Pallavi, 13. “Unfortunately, our son Arvind, 21, [who is doing his post-graduation in communication from Christ College in Bangalore] could not make it,” she says.

So what sort of a father is Venugopal? “He is very friendly with them,” says Reshmi. “He never scolds the children or asks them to study.  When my son was a child, Venu was travelling a lot. So he was not able to spend much time with him. But with my daughter, he is there much more.”

Whenever he is at home, at Thiruvananthapuram, Venu gets up at 6 a.m. Then he does yoga and works on a treadmill. Otherwise, he might go for a morning walk. “This takes about 45 minutes,” says Reshmi. Thereafter, he will read the newspaper, along with a cup of tea. It is only after that Venugopal will switch on the mobile phone. “Then depending on the calls he has got, the rest of the day will be decided,” says Reshmi.

During their free moments, the family goes for movies, social visits, or to Venu’s parents’ house nearby. “Otherwise, he will sit and read,” says Reshmi. “He is a voracious reader of fiction and non fiction, both in Malayalam and English.” Incidentally, the book Venugopal is reading now is ‘Marxism in India: From Decline to Debacle’ by Kiran Maitra.

Asked for tips for a successful marriage, Reshmi says, “Nowadays, youngsters don’t want too much of an age gap between the spouses. Maybe, one or two years. But I feel that an age gap is good. Because then the man will be more mature. The gap between Venu and me is eight years.”

She urges girls not to nag their husbands. “I know of many wives who do this too much,” says Reshmi. “Men don’t like to be nagged. Don’t compare them to another person. A lot of times I disagree with what Venu is saying, but I keep quiet, and react later when we are both calm.”