Songs from The Heart 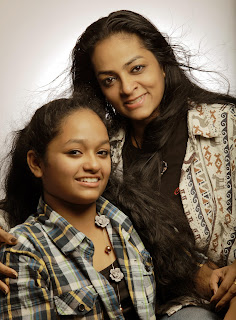 Singers Sarina and Sheryll have brought out an album of western country music, ‘You and Me’, the first mother-daughter duo to do so in Kerala

Every morning, Sarina travels from Thrissur to Kochi for work. One day, at the Ernakulam North station, a small girl stretched out her hands and asked for alms. “It was heart-breaking,” she says. “Nowadays, you can also see adults begging on the streets.”
An inspired Sarina penned down the first few lines:

‘Every morning I see you,
You pass me by.
I look in your eyes
And it’s the same old smile.’

Sarina also wrote a semi-autobiographical song called ‘Keep Believing’. “This was based on some turmoil in my personal life,” she says. “You are sure that the people closest to you are going to be there. But sometimes, when you go through bad experiences they are the first ones to walk away. Hence, there is a need to keep believing. You are created not to be dependent on anybody.”

These songs are part of an album called ‘You and Me’. What is interesting is that Sarina’s 14 year-old daughter Sheryll has also contributed three out of a total of seven songs.

"The first song is called ‘Future Generations’,” says Sheryll. “It is about the youngsters. The second song, ‘A Special You’ is dedicated to my mother. The third one is, ‘Why don’t you talk to me?’ This is about how you feel empty at times. The person you love the most remains silent for a long time.”

Sarina is excited by her daughter’s talent. “When Sheryll showed me the first song, she not only had written the lyrics, but had composed the melody also,” says Sarina. “Sheryll sang it in such a manner that everything fell in place.”

Of course, the theme of ‘You and Me’, is personal experiences. “Sometimes, when you are low, you feel completely lost,” says Sarina. “But there is always an inspiration or a power that tells you there is much to look forward to. You need to keep the faith.”

All the songs were recorded over a period of one-and-a-half years at a studio in Tripunithara. “One reason why it took so long was because I did not want Sheryll’s studies to be disturbed,” says Sarina. “So we recorded during the Onam and Christmas holidays.”

For the music arrangements, they took the help of Sumesh Parameshwar, who plays for a band called Kalinga.

“But my idol is Shania Twain,” says Sarina. “It is not just her music, but the way she sings. She has such an individualistic style. And the range is remarkable.”

Sarina also had a remarkable start to her career. In 1991, her elder sister, Rose, as well as Sarina heard that the noted 13AD band were looking for female singers. They went for an audition at the Sealord Hotel and were selected.

In the next two years, they performed with 13 AD in places like Mangalore, Bangalore, Goa, Pondicherry, Chennai, and Kolkata. The sisters sang back-up vocals on 13 AD’s second album, ‘Tough on the street’. “Both sisters harmonised beautifully with 13 AD,” says drummer Pinson Correa. Thereafter, Rose opted out in 1993, because of marriage and Sarina followed.

In 1995, Sarina got married and went to Dubai where she stayed for several years. There, she became the lead singer in the choir at the St. Michael’s Church at Sharjah.
“I sang hymns like ‘Amazing Grace’, ‘In his Time’, and ‘It only takes a Spark’”, she says. Sarina also performed on Hum FM Radio.

In 2007, she returned and settled in her home town of Thrissur. And she has played with local bands like ‘Nomads’ and ‘Kalinga’.

“However, it is difficult to adopt singing as a full-time profession,” she says. “So I work as a consultant, to earn my bread and butter. But I am always looking out for opportunities to sing.”