The impact of crowds 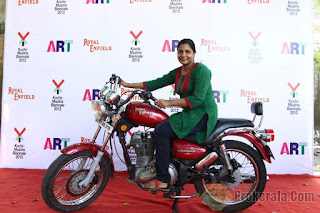 At the Kochi Muziris-Biennale, there is one painting which immediately catches the eye, because of its length. Titled, ‘Daily Violence’, the work is 30’ long and 4’ wide. Done in watercolour, it shows a group of 50 people, 25 on opposite sides, pulling at a rope, in an obvious tug of war. But these are people from different countries: so there is an Afghan girl, a muscular Spanish man, an Arab woman in a black burqa, and a jean-clad American woman, among many others. Behind these people are the faces of 12 babies. And studded all across the painting, like small balls, are the flags of 220 countries.

“In most societies, there is a tug of war between people,” says young Kochi-based artist PS Jalaja. “Children suffer the most because of the violence between adults. I wanted to show that.”

She has painted the children, with scratches, and in a golden colour to give an indication of gunfire and bursting bombs.

And Jalaja had a particular reason for the largeness of the painting. “I wanted to honour the traditional mural art of Kerala,” says Jalaja. “At the same time, I wanted to make it look contemporary and like a wall painting.”

Jalaja was also inspired by the work of the great Mexican artist Diego Rivera (1886-1957), whose large frescoes established the mural art form in Mexico.

As she talks, in front of her exhibit, a French woman steps in close. She moves from one end of the work to the other and suddenly exclaims, “France!” and points at the flag of her country: blue, white and red bands.

Jalaja smiles, and says, “I remember a man came one day and pointed at a flag and said, ‘This is my country Uganda.’”

In the past four years, Jalaja has been obsessed with the concept of crowds. “I found it interesting how a crowd can form because of an accident, a procession, a war, or a death, and how it can get violent all of a sudden,” she says.

In another work, a 10’ by 5’ watercolour, which was selected for the 2011 Prague Biennale, Jalaja drew 1500 stern-looking policemen from 40 countries who are pointing guns at six helpless people. “I just wanted to show how ordinary innocent people are harassed by the police,” she says. “This happens in so many countries.”

The artist, a daughter of a carpenter, grew up in a small village, called Keezhillam. It was her father who encouraged her to take up painting. “He was very interested in the arts,” she says. Subsequently, she ended up doing her Master’s in painting from the RLV College of Fine Arts in Tripunithara, a suburb of Kochi.

Unlike most people, Jalaja has become a full-time artist. She has set up a studio in Udayamperoor, around 12 kms from Kochi. “I know it is a hard life, to live solely by art. Not all the paintings you do, sell. But this was my father’s dream and it is my dream to dedicate myself wholly to art.”