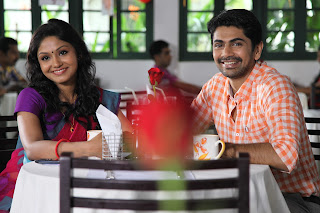 Nishan K.P. Nanaiah, a Coorgi, has established his presence in the Malayalam industry. His new film is ‘10.30 a.m. Local Call’

During the shoot of the song, ‘Pularumo’ in ‘Ritu’, director Shyamaprasad told the actors, Nishan K.P. Nanaiah and Reema Kallingal, as they sat on the backseat of a Swift car at Techno Park, Thiruvananthapuram, that they should share a kiss to indicate the closeness of the couple.

But Reema felt inhibited. It was her first film and she was wondering the effect it would have on her parents and relatives. A joking Shyamaprasad told Nishan, “Pull up your socks. Women don’t want to kiss you.”

Finally, it was decided that Nishan would hug Reema, and kiss her on the side of the neck. But somehow, no matter how much he tried, the scene looked awkward.

Shyamaprasad said, “It is not wrestling, Nishan, but love-making.”

Nishan laughs at the memory. “Shooting for 'Ritu' was one of my best experiences,” he says. “And Shyamaprasad Sir is such a wonderful director, always joking and relaxed on the set.”

And Nishan is much impressed by the director’s talent. “There were times when he would end the scene in one shot, while I would be waiting for the close-up,” he says. “But Shyamaprasad Sir would say he did not need one. He is a director who goes with the flow of the script. That is why his films are like poetry. There is a different feel to it.”

Nishan, a Coorgi, grew up in Kolkata, and is the son of a retired Deputy Commissioner of Customs. After his graduation he passed an acting course in the Film and Television Institute of India at Pune. And through luck and fortuitous circumstances, he has managed to make a mark in Malayalam films, even though he does not speak the language. Nishan has acted in Sibi Malayali’s ‘Apoorvaraagam’ and received positive reviews for playing Rustam in ‘Ee Adathu Kaalathu’. He also had a role in ‘Note Out’, and now has acted in ‘10.30 a.m. Local Call’, directed by Mannu Sudhakar, which will be released soon.

“It is a romantic thriller,” says Nishan. “The name of my character is Alby, and I work in a Nissan showroom at Kochi. I have a wife, Anne, enacted by Mrudhula, and there is this other girl, my friend, who is played by Shritha. A man is not supposed to have two women in his life and the film is about what happens after that.” The other stars include Lal and Kailas.

Nishan decided to act in this film because when he listened to the script narration, for over three hours, he was gripped by it. “What will happen next was the thought in my mind,” he says. “I could visually see the movie. And I had a gut feeling it would work. And, touch wood, the songs [by Gopi Sundar] have become hits. I have to follow my gut instinct, because I don’t have anybody in the industry to guide me. Some films work, some don’t.”

Of course, till now nobody has been able to predict a hit. “Sometimes, when I hear the narration it is very good,” says Nishan. “But when it is transferred onto the screen, it does not work. So how can you anticipate that? The only thing under my control is my acting and I try to do the best I can.”

Nishan is hoping the mega-budget film, ‘David’, directed by Bijoy Nambiar, which was released a few days ago, will do well. It has actors like Neil Nitin Mukesh, Tabu, Lara Dutta, and Vikram, “I play Vikam’s best friend, Peter, and my segment is based in Goa ,” says Nishan.

And then Nishan, a likable young man with a keen intelligence, breaks out into a winning smile.