‘She has no airs’ 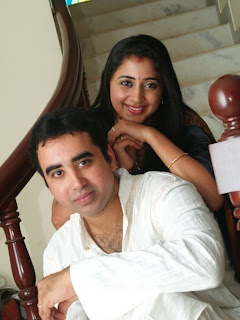 In March, 2006, Shyam Radhakrishnan attended a party in Chennai. Most of the guests were from the film industry. Suddenly actress Suhasini Mani Ratnam stepped forward and led Shyam to a girl standing at one side and introduced him to her. She was none other than the actress Kaniha.

“We hit it off straightaway,” says Shyam. “We had a nice conversation, and it was love at first sight for me.”

In that first meeting Shyam was much taken up by Kaniha’s simplicity and humility. “She had no airs that she is a star,” he says.

Thereafter, the New York-based IT businessman flew back to the United States, but remained in touch through phone and e-mail. A few months later, he returned and they went out on several dates.

One day, very casually, Shyam said, “Maybe we should think of getting married.”

Kaniha was half-expecting the proposal. “But I could see on her face what she was thinking: ‘How do I break this news to my mum? How do I say yes, when my career is going so well?’”

Shyam smiles, and says, “But I think she understood that I would not be opposed to her acting after our wedding. Many heroines went through this problem after marriage. But that would not be an issue with us because I have a deep understanding of the industry.”

Put simply, Shyam’s family has been in the Tamil film world for the past seventy years. His grandmother, Sundaram Jayalakshmi, was one of the first heroines and had acted opposite the great actor MK Thyagaraja Bhagavathar in 1942. Shyam’s granduncle was veena exponent S. Balachandran who won the Padma Bhushan award in 1982. His sister, Jaishree, was a top heroine in the mid 1980s, apart from his cousin Sukanya.

Eventually, Kaniha said yes, and the marriage took place on June 16, 2008, in Chennai. For their honeymoon, they went to Goa. “It was a fantastic few days at the Leela Kempinski,” says Shyam. “We are both outdoors people and love the water and beaches.”

As Shyam got to know Kaniha better, his admiration grew. “Nothing has changed with this girl,” he says. “Humility is first nature for her. She is a good actress, wife, mom, and a qualified engineer. Kaniha can sing, dance, and is such a good cook. In fact, she can make every single South Indian and Italian dish. One day, I told her I like Italian food and she mastered it within a week.”
Shyam also admires the way Kaniha has handled her career. “She has an uncanny ability to pick good projects,” he says. “Kaniha is not somebody who says, ‘I am going to take all the movies I get’. Some people jump in and do 20 movies a year. But Kaniha only does one or two a year.”

And when she is on the set, she is dedication personified. “Whatever movie she is acted in, whether it is with Mohanlal or Mammooty, she has done really well, like in ‘Pazhassi Raja’,” says Shyam. “They were shooting for three years, but she was patient and did not act in another film. She is very committed to her work.”

When she is not working, the couple gets up at about 7.30 a.m. at their bungalow on East Coast Road in Chennai. “Actually, our son, Rishi, who is two years old, wakes us up,” says Shyam. Breakfast includes egg whites, and wheat bread. Thereafter, Shyam goes out and comes back by 1.30 p.m. for lunch. “Sometimes, I crave for Madrasi food,” says Shyam.

On other days, they go out. Favourite places to eat include ‘Ente Keralam’, the ‘Dakshin’ at the Park Sheraton hotel, and ‘Kipling Café’. In the evenings they work out together, at home, on the treadmill, to keep fit. At night they go visiting friends. And while Kaniha and Rishi go to sleep by 11 p.m., Shyam stays up till 3 a.m. doing business online because it is daytime in New York.

Shyam is, indeed, a night bird. Once they went to Las Vegas, where Kaniha had a performance, organised by the Malayali Association. So Shyam invited his bachelor friends and they hit the casino at the Bellagio Hotel and were missing for several hours.

When he finally returned, Kaniha went ballistic, especially because she was also pregnant. Shyam apologised, but made Kaniha smile when he shouted, “Baby I won,” and showed the $3000 he won at the gaming tables.

“A marriage should be more like a friendship rather than a husband and wife kind of relationship,” he says. “Spend as much time with each other as possible. Be honest and candid. If you are not frank with your spouse, why did you marry?”