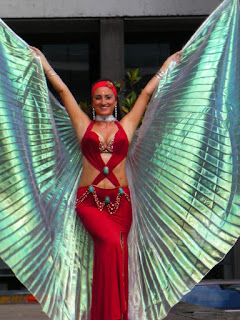 By Shevlin Sebastian
About a minute into Katie Holland’s belly dancing performance at a hall in Kochi, the usher at the door opened his mouth and, involuntarily, his tongue slid out. Soon, he seemed to be panting. The drooling epidemic spread among the youngsters in the audience. As for the middle-aged men, sitting next to their strict-looking wives, their faces were blank, while their eyes enlarged in forbidden pleasure.

And all because the white-skinned Katie was wearing a sequined black bra, and a tight black skirt, with long slits. She was swirling around the stage, now moving fast, now moving slow, displaying smooth, slim legs, while the muscles of her stomach moved about, as if it had a life of their own.

Sometimes, she was dancing to Arabic music, at other moments to pacy Bollywood numbers and then to the music of BBC award-winning percussionist and composer Abhishek Basu and his band. But it was not a mindless movement.


“The charm of belly dancing is not only about how you use your body but the way you interpret the music,” says Katie. “So, if it is a violin, the movement is more with the upper body and arms. With the accordion, it is with the hips. If it is a tabla, there are sharper twists of the hips, chest, and shoulders. As for a band or orchestra, it is a big sound, so you make big movements.”

Katie was born in Leicester, United Kingdom. At the age of three, she was taken to dance classes by her parents. But when she was 15, she saw a woman doing belly dancing on TV. “I realised that this was what I wanted to do,” says Katie. So, she went to Egypt and Morocco and began training. Apart from the thrill and joy of doing the dance she realised that there are health benefits.

“Belly dancing is good for the body, before and after pregnancy,” she says. “It helps solve back pain, menstrual problems, and depression. A lot of women like the music, costumes, jewellery, and make-up. It makes them feel good about themselves.”

Now 18 years have gone past, and Kathie has performed in Europe and Asia but for the past seven years she has settled in India, based first in Goa and now in Delhi. “It is easier to make ends meet in India, than in England,” she says.

Katie has performed at the Goa Film Festival, for many event companies all over India, and for product launches like Gitanjili Jewellery, Hero Honda, Moet Chandon and Vodafone. “I have also danced at private parties of celebrities like Vijay Mallya, Shaan, Madhuri Dixit, and Salman Khan.” But she is frank enough to admit that her entry to Bollywood has been stymied by her reluctance to go the casting couch way.

“There are a lot of girls from Eastern Europe who are giving a bad reputation to the rest of us,” says Katie. “I am white so they think I am easy to get. I have this problem all over India.” If somebody calls Katie for a show, she has to make it clear that she is a dancer, and nothing more. “The first year I was shocked,” she says. “The organisers would tell me the other girls are doing it, so why not me?  I have lost work because I have said no.”

And Katie is also trying to get used to the vastness of the country. One day, she was told that there was a dance programme at a place 15 hours from Delhi. So, she dressed casually in a cotton T-shirt, slacks, and sandals. “I was sleeping in the car when I suddenly woke up wondering why I was feeling so cold,” she says. “I asked the driver about the location. And he replied that I was in Shimla, in the Himalayas.”

She had to hurriedly borrow the coat and hat from the agent. “I was there for two days, and was crying because of the cold,” she says. “I learnt my lesson. Nowadays, before I go anywhere, I always check where the place is and what the climate will be like.”

Asked what she likes about India the most, Katie says, succinctly, “Indian dance. I have been learning Bharatanatyam for the past five years. It is spiritual and the movements are so precise.”  (