A Son Confronts his Abandonment 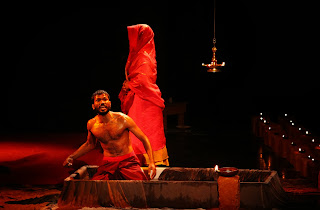 In the play, 'Kunti-Karna', Karna and his mother Kunti have a complicated relationship, just as the warrior has ambivalent feelings for Krishna and Arjuna

Karna approaches the stage from the aisle of the JT Pac hall in Kochi. He is bare-bodied and wears flared trousers. As Karna steps on stage, a haunting Kathakali song is heard on the soundtrack. Soon, he makes movements, resembling Kalaripayattu, the ancient Kerala martial art form. There is an absolute silence for several minutes.

Karna groans, “Mother, aah, aah.” He falls into a tank of water, placed at one side of the stage, to indicate his abandonment as a baby by his mother Kunti.

He keeps dreaming of his mother. “As the darkness sucks me in and I find it difficult to sleep, a woman appears before me again and again,” says Karna. “I beseech her with tears. Mother, remove your veil. Let me see your face.”

And then Kunti appears in front of him standing on a small trolley pushed by a younger version of Karna, her face and body covered by a red shawl. Karna rises, and says, “O mother,” but Kunti keeps pushing him back into the water. This falling down, the splash, and the rising-up makes for a riveting sequence.

“The water, for Karna, is a symbol of being in the womb of his mother,” says Koumarane Valavane, the director of the play 'Kunti Karna'. “The image of water is also in his memory because he had been abandoned on the Ganges river.”

The story, as related in the Mahabharata, goes like this: Through the sun God Surya, Kunti has a child called Karna. In order to preserve her honour, before her marriage to Pandu, she goes to the Ganges river and, with the help of her maid, Dhatri, places her new-born son in a basket and sets him adrift.

In subsequent scenes, Karna carries on crying for his missing mother. Later, he has a confrontation with his half-brother Arjuna, who taunts Karna by saying, “You don't know your father's name. This place is not for you. Out!”
A defiant Karna says, “Arjuna, today for lack of an identity, you have rejected me. But someday, our strengths alone will matter. We will fight and I will kill you.”

It was martial arts that saved Karna from the feeling of being abandoned. “He is deeply involved in it,” says Koumarane. “Otherwise, Karna would have become useless or an alcoholic.”

Meanwhile, Arjuna goes to the Himalayas to get the Pashupatastra weapon from Lord Shiva. While there he has a fight with Lord Shiva, and is defeated. This scene is shown in dramatic style in the play. Arjuna climbs up two long strips of white cloth hanging from rods from the ceiling and does fight sequences by twisting and turning, going up and down, forward and backwards, deftly using his hands and feet, and, finally, when he is defeated, he slides, head first, straight to the floor.

Thereafter, there are dramatic fighting scenes between Arjuna and Karna, with the latter having animated conversations with Krishna and Parasurama and, at the climax, Karna is killed.

It is a gripping play, with intense and tight acting by the performers, all members of the Indianostrum Theatre in Pondicherry. They include Vasant Selvam (Karna), Sravanthi Vakkalanka (Kunti), Parasurama (Kourmarane) and Naveen Kumar J (Krishna), among others.

Unusually, there are long periods of silence, when nothing happens, except for soundless Kalaripayattu movements. This seems to be a risky ploy to use in these impatient times. “I wanted to avoid the noise and talk that is present in every play,” says Koumarane. “Because I believe that silence has more power than words.”