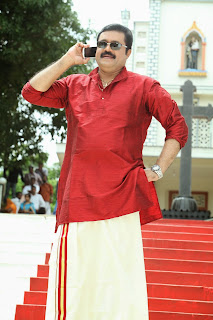 Following a two-and-a-half-year break, Suresh Gopi is returning to the screen with a role in 'Salaam Kashmir'. He talks about this and a host of other topics

“My role in 'Salaam Kashmir' is going to be a big surprise for the audience,” says actor Suresh Gopi, who plays Tomy Eppan Devassy. Tomy disrupts the life of a family whose head is Sreekumar (Jayaram). “It is a social drama,” says Gopi. “This is the first time I am playing such a character. I don't want to say anything more. I would prefer that people see the film.”

The shooting, as the title suggests, took place in Kashmir. And for Gopi, Kashmir has changed, following his last visit 20 years ago. “The physical beauty as well as the inner charm of the people has been spoiled,” he says. “Politicians in Kashmir are toying with the emotions of the people. When I was there, I had an ever-present feeling that at any time there could be a bomb blast.”

Asked whether he was scared, Gopi says, “I was prepared for anything, including giving up my life for the nation.”

This is Gopi's first film after a two-and-a-half-year gap. During that time, he had been the host of a popular television show, ‘Ningalkkumagam Kodeeswaran’ (You too can become a crorepati). But because of the Kerala Film Chamber of Commerce rule which stated that he could not do both TV and films at the same time, Gopi had concentrated on his TV show.

“I will not call it a show but a real-life event,” he says. “Thanks to it, I could understand the difficulties, pain and sufferings of so many people. It was then that I realised that my life is full of blessings. No doubt, there have been tough times, but God has always treated me well. I am happy for myself and my family.”

Today, Gopi has signed more than twenty films, including one with Manju Warrier, who is making a comeback after 14 years. This is 'Pathram-2', a sequel to 'Pathram', a hard-hitting drama, set in the media world. Like the first film, the sequel will also be directed by Renji Pannikar. “Shooting is slated to begin in December, 2014,” says Gopi. “I am looking forward to acting with Manju. She is one of the best. I am sure she will perform well.” Gopi has also been selected to play sub-inspector Harry in the fifth installment of 'Oru CBI Diary Kurippu'.

In the meantime, there has been a buzz about a falling-out between Gopi and Mammooty. A frank Gopi says, “There were some unpleasant situations which arose. It was not my fault. But I have been hurt. I can say clearly that I have, not ever, behaved disrespectfully towards Mammooty and will never.”

In fact, sometime ago, the duo did a film together, 'The King and The Commissioner'. “The rift has been healed,” says Gopi. “I was there for all the four ceremonies conducted in connection with [Mammooty's son] Dulquer's marriage. In fact, I was the only person from the industry to attend all the functions.”

Meanwhile, the news is that Gopi is planning to do action films. “That is not true,” he says. “If I was looking to do an action film I would have started off with a film which is being made by Major Ravi. But I told him that I would be willing to do a character role, with a good story, which explores life. If the story requires action, then I will do it, otherwise not.”

During his hiatus from films, several new-generation directors, like Rajesh Pillai, Aashique Abu, Arun Kumar Aravind, and Anwar Rasheed have made a mark. But Gopi has been impressed by a different film. “The best movie I have seen in recent times is 'Pranchiyettan And The Saint' by Renjith,” he says. “I regard it as a new-gen film because, through the plot, presentation, style and treatment, it has broken barriers.”

Gopi, who has watched 'Pranchiyettan’ 16 times, says that it will be liked even after two decades. “It is a film carrying several layers,” he says. “And each time you see it, you discover a new aspect.”

Then Gopi smiles and says that he did enjoy watching new-gen films like 'Traffic', 'Cocktail' and ‘Ustad Hotel’. “I must also mention Lal Jose’s wonderful ‘Diamond Necklace’,” he says.

The success of new-gen films seems to indicate that audience tastes have changed. But Gopi is not sure. “It is the director who should be aware of what the audience needs,” he says. “Each film-maker has a responsibility of adding to the growth of culture and the film industry. I can only follow them. Today, I am a fresh kid on the block. My only request to directors: please use me properly.”