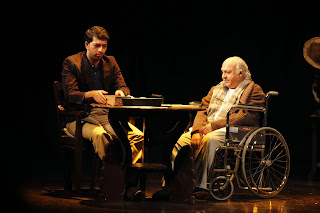 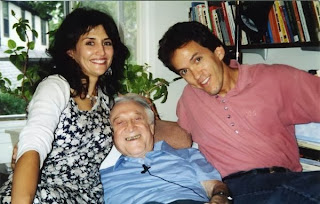 The play, 'Tuesdays With Morrie', is the story of Morrie Schwartz, a former sociology professor, who, even as he is dying of a degenerative disease, displays sparkling wit and wisdom

Photos: A scene from the play; the real-life Morrie Schwartz (centre) with Mitch Albom and his wife Janine

One morning, in 1995, famed American television anchor Ted Koppel read an article about death by Morrie Schwartz, a former sociology professor of Brandeis University, USA, in a newspaper. Morrie was dying of Amyotrophic Lateral Sclerosis (ALS), which causes muscle weakness and wasting away of the body Touched and impressed, Ted got in touch with Morrie and decided to do an interview for his popular show, 'Nightline'.

One man who saw the programme, while channel surfing, was Morrie's old student, Mitch Albom, a sportswriter. He had promised to remain in touch, following his graduation. “But I did not,” he says. “I proceeded to break that promise every day, every week and every month for 16 years.”

After the telecast, Mitch felt guilty. So, one day, he flew 1200 kms, from Detroit to Newton, Massachusetts, to meet up with Morrie. And in that first meeting, Morrie spoke about the first signs of ALS. “It started with little things,” he says. “I would feel exhausted for no reason. Then I began to stumble. One night on the dance floor, I fell. And I have never fallen while dancing. So I did a lot of tests, but the answers were inconclusive. Finally, I went to see a neurologist.”

And it was this neurologist who confirmed to Morrie that he had ALS, with a limited time to live.

And then Morrie described his feeling when he came out of the hospital. “It was a beautiful day, the sun was shining, the sky was blue, the children were laughing,” he says. “And I wanted the world to stop. Inside my head, I wanted to scream, 'Make the sun die, make the sky black. I am dying'. But the sun stayed there, the kids continued to laugh. The world did not change because it does not cater to me. I asked myself, 'Am I going to withdraw from the world as many people do?' No. I decided I am going to live for as long as I can and embrace the world.”

All these dramatic dialogues were spoken in a play, 'Tuesdays With Morrie', at the JT Pac, Kochi, recently. Produced by the Mumbai-based National Centre for the Performing Arts, in association with Akvarious Productions, the actors included Adhar Khurana (Mitch), Akash Khurana (Morrie) and Lucky Vakharia (Nurse Connie and Mitch's wife Janine).

And what can one say about the veteran Akash as Morrie? He was simply brilliant. Starting the play, wearing a cap, and a suit, with a red tie, and then showing the gradual disintegration of Morrie -- the loss of mobility, trembling hands, back pain, sudden crying -- and in the end, dressed in a brown sweater and pyjamas, seated in a wheelchair. It was irresistible.

In one scene, Morrie tries to water a plant on a window sill, holding a glass in his shaking hands and then it slips and falls to the floor. The tinkle of the breaking glass echoed through the hall.

And Akash as Morrie had so much of wisdom, with a dialogue delivery that was clear and fluent at all times. It was a voice that went on and on, refusing to give up on life, even as his body did. For the audience, it was a journey into that most terrifying event that awaits all of us at the end: our deaths.

“Once you learn how to die, you learn how to live,” says Morrie. “I wish I had been more aware of death every day of my life. [The poet] Auden said, 'We must love one another or die'. I have got news for you, Mitch, my friend. You are dying too. Just a lot slower. ”

For Morrie, his most painful memory was the death of his sick mother when he was a child. “One morning, my father calls my brother and I for breakfast,” he says. “Just as we sit down, this telegram arrives announcing her death. I was eight years old. I wanted my mother back. I wanted her to hold me, to sing me the songs she would sing, but she was gone.”

However, even as the play was gripping, young Adhar as Mitch clearly needs some time to develop as an actor. His dialogue delivery sounded flat and emotionless at times, and he could not inhabit his character the way his real-life father did with Morrie. But these are early days for Adhar in his career.

Meanwhile, as is well known, Mitch Albom visisted Morrie over several Tuesdays, till he died on November 4, 1995. Thereafter, Mitch wrote a book, 'Tuesdays With Morrie', that became a mega bestseller. Thanks to the book and the Nightline broadcast, Morrie lives on.

Or, as Mitch said, “If you lead your life like the way Morrie did, making people your priority, then when you die, you are not really gone. You live inside the hearts of everyone you touched.”