Can't See, but Can Play Football 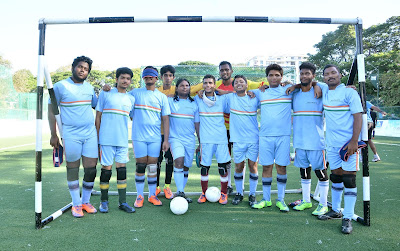 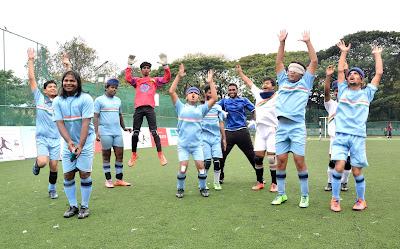 At 6.30 p.m., on a balmy August day, it is getting dark at the astro-turf ground of the Regional Sports Centre at Kochi. But Malaysian Technical Advisor Loo Wai Keong is just getting warmed up. Twelve boys are standing one behind the other at one side of the ground.

Loo picks up the ball and throws it at the lead player, Mohammed Azharuddin. He collects the ball and moves forward. As he comes closer, Loo shouts “Move to the right.” Mohammed moves to the right. Loo then shouts, “Shoot.” And Azharuddin does so. The ball hits the top-right corner of the net. “Well done,” says Loo.

When Abhimanyu Naskar comes forward, the coach shouts at him in English. But Abhimanyu knows only Hindi. At once, the Dehra Dun-based physical instructor, Naresh Singh, says, “The coach is telling you to move faster. Otherwise, the defender will take the ball away from you.”

From a distance, this would seem like a regular workout for a football match. But at close quarters, you can get a shock. All the players are blind.

They have come from places like Delhi, Dehradun, Mumbai, Kolkata, Jodhpur and Kochi. And all of them are training to represent India in the Asian Championships, which is being held in Tokyo, between September 2 and 7.

The team is being mentored by the Kochi-based Society for Rehabilitation of the Visually Challenged (SRVC) and the Indian Blind Sports Association (IBSA). Says Brand Ambassador Shriya Saran, “The Asian Championships will provide a great exposure for the Indian team.”

Incidentally, five-a-side blind football has its own rules: four players should be B1 (fully blind), while the goalkeeper can be B3, which means he can have partial sight, or be fully sighted. The Indian team has two sighted goalkeepers in Sanjay Saji and Melson Jacob.

The area of play is 40 x 20 metres. There are cushioned boards placed on all sides so that the ball does not go out. It also prevents players from hurting themselves. “Before the match, the referee places three layers of bandage on the players to create total darkness, as some may have a slight perception of light,” says MC Roy, Project Head, SRVC. “A game lasts 50 minutes, with a break of 10 minutes. During a match, players can be substituted any number of times.”

As for the ball, it is smaller than a football. “It does not bounce as much,” says Indian coach Sunil Mathew. “In fact, it is slightly heavier because there are ball bearings inside it. The sound is audible to the people who are playing.” Before the start, the coaches of the two team stand at the sidelines. As the match progresses, they shout frantic instructions to the players.

Meanwhile, when a defender approaches a player who has the ball, he has to keep shouting “Voie, Voie.” Sometimes, there is a collision. Many players have suffered injuries on the arms, knees and face. To counter that danger, centre-forward MD Salim Khan plays aggressively.

“I was selected after taking part in the Nationals in January at Delhi,” says Salim, a probationary officer in a State Bank of India branch at New Delhi. “I am looking forward to going to Tokyo, although the competition is going to be tough.” The other teams include Iran, Japan, China, Korea and Malaysia.

By the way, the concept of an Indian football team came to Sunil accidentally. One day, when he doing research on the Internet he came across an astonishing statistic. “A country like Brazil, with a population of 198 million, has 660 visually-challenged football teams, while India, with a population of 1.2 billion, has never put up five people for a tournament,” he says. “That was the impetus for SRVC and the IBSA to form a team.”

But to take part in the Tokyo championships, it was a generous grant from the Tata Trusts in Mumbai which tilted the scales.

Biswanath Sinha, Associate Director of Tata Trusts, says, “We want to champion the cause of the visually challenged -- their right to sports, entertainment and a quality life like every other human being.”