Under the Yoke Of Oppression 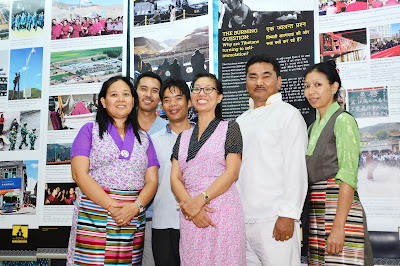 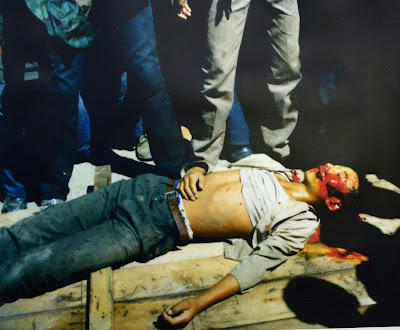 'A Long Look Homeward', a travelling exhibition of photos from the permanent collection of The Tibet Museum, Dharamshala, as well as artifacts from the Friends of Tibet, had a showing at Alleppey, Kerala

Photos:  A group of Tibetan men and women at the exhibition. Among them is Dorjee Rapten Neshar (second from right), the Chief Medical Officer of the Tibetan Medical and Astrological Institute at Bangalore. Photo by Ratheesh Sundaram; Gonpo Paljor, a young Tibetan protester who was shot dead

On the ground in front of the Centre for Political and Social Art building at Alleppey, Kerala, there are cashew and mango trees. Thanks to a steady breeze, blowing in from the Arabian sea, the leaves are making a rustling sound. It is, indeed, a peaceful scene. But when you step in to view 'A Long Look Homeward', a travelling exhibition of photos from the permanent collection of The Tibet Museum, at Dharamshala, as well as artifacts from the Friends of Tibet organisation (March 3-5), the scene is anything but peaceful.
Right opposite the entrance is a photo of Gonpo Paljor, a young Tibetan protester who is lying on wooden slats, on the ground, with a blood-spattered face. Because of the low angle of the shot, only the shoe-clad feet of the people standing around can be seen. On March 5, 1988, Gonpo was fatally shot in the head by the Chinese during a protest demonstration.
Next to Paljor, are a series of photographs which show the systematic destruction of monasteries and religious institutions. They include the ruins of the Ganden Monastery, founded in 1409, and destroyed during the Chinese Cultural Revolution of 1985, Yumbul Kang, Tibet's first fort, which was built in 127 BC, as well as the Radreng Monastery, which was founded in 1057.

“Since the Chinese occupation of Tibet in March, 1959, over 6000 buildings have been destroyed,” says Tashi Phuntsok, Director of The Tibet Museum. “Ancient images and sculptures have been melted and sold in international art markets.” In the early years of the occupation the Chinese had used the holy scriptures as shoe soles.
“There are four themes: Invasion, Destruction, Resistance and Community in Exile,” says Sethu Das, President of Friends of Tibet. A total of 115 photographs are on display.

Apart from that, there are the coins and currencies of Free Tibet and a folded green uniform of the hated People’s Liberation Army of China.

At one corner there is an old-style Zenith radio. A couple of years ago, when the Dalai Lama came to Kochi, Sethu told him, “Your Holiness, do you remember this?”

The Dalai Lama stared at the radio. And then shook his head. Then Sethu said, “Holiness, this is your radio.” The Dalai Lama burst out laughing. “He never expected to see it in Kochi,” says Sethu. “Later, he said that he used it when he was staying at the Potala Palace at Lhasa, as well as in Dharamshala.”

The radio was gifted to the Friends of Tibet by the Dalai Lama's younger sister, Jetsun Pama.

At the venue, the visitors include a group of Tibetan men and women, who are on a short visit to Kerala. Among them is Dorjee Rapten Neshar, the Chief Medical Officer of the Tibetan Medical and Astrological Institute at Bangalore. He points at a photo, in which several Chinese and Tibetan men are seated at a long wooden table. Just behind them is a large Chinese national flag hanging on the wall.

This was the signing of the infamous 17 point agreement between the Chinese government and the Local Government of Tibet on May 23, 1951, at Beijing. An anguished Neshar points at a black-haired man and says, “That is Ngapoi Ngawang Jigme, the leader of the Tibetan delegation. He was pro-Chinese and was keen to sign. The other members did not want to do so, because it meant we would lose our independence. The Chinese said, 'If you don't sign, we will invade'. Eventually, it was signed under duress. But we have never accepted this agreement.”

One of the most poignant sections is where the faces of young people who had died through self-immolation have been put up. “Because of censorship in Tibet, the outside world does not know that, so far, 143 young Tibetans have self-immolated themselves, since February, 2009,” says Phuntsok. “They were protesting the loss of religious freedom and identity, as well as economic marginalisation.”

The exhibition will travel to Kochi, Thiruvananthapuram, Kozhikode, as well as Goa and Maharashtra. “This is to make people aware, especially in South India, of the tragic situation inside Tibet,” says Phuntsok. “We are a people without a country.”