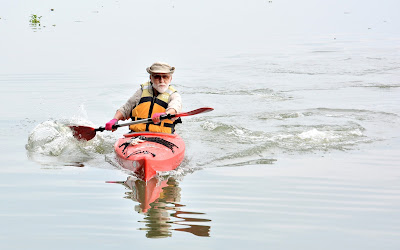 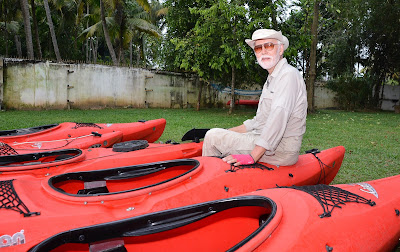 The German architect Karl Damschen is Kerala's leading conservation architect. But he has another passion: he is spreading the joys of kayaking among the people of Kochi

From a distance, on the Vembanad lake, near Kochi, on a recent Sunday, German architect Karl Damschen saw that rain had begun to fall. He expected it to hit him at any moment. So, he stopped his kayak, quickly slid into his waterproof jacket, put on a hat with a wide brim, and zipped up the spray deck.

This is a flexible cover, which prevents water from entering the boat through the seating area. The ten kayaking members of the Global Sailing Club (GSC), at Panangad, Kochi, including Damschen's wife, Annelies, did the same.

The group began kayaking again. Soon, the rain hit them with force: thick, heavy drops, with streaks of lightning lighting up the dark sky. “It was so much fun,” says Damschen, 73. “Unlike in Europe, where the rain consists of cold water, this was warm and enjoyable.”

Thereafter, over a day, the team stroked their way to the town of Vaikom, 15 kms away, and returned to Kochi.

For the past two-and-a-half years, ever since the GSC was set up, Damschen has been propagating kayaking. “I have given a six-week training course to those who are interested,” he says. “As for the right technique, most beginners pull the paddle backwards, but in kayaking, you have to push forward, so that you can use the weight of your body. This is the method followed by the Eskimos.”

Thus far, there are 20 regulars. They include businessmen, industrialists, professionals and homemakers. And all of them go kayaking on the weekend. “It is only through kayaking that I could appreciate the beauty of Kerala,” says homemaker Anuja Asher. “We have gone to places where no car can go.”

Kayaking has a lot of benefits. “It is physically taxing, but enables you to keep fit,” says Annelies, 73. “And during a trip, you can observe nature at close quarters, especially when you move through the backwaters. It is also a smooth ride, unlike a car where you have to experience potholes, traffic jams and air pollution.”

The club, incidentally, has 11 kayaks. And they have all been imported, from the Prijon Kayak Company in Rosenheim, Germany, which is known the world over for making the best kayaks. The length of a single kayak is 16 feet, and its width is two feet. And it weighs only 24 kgs.

Damschen fell in love with kayaking as a child growing up in the town of Gelsenkirchen in North Germany. One day, when he was ten years old, while walking, with his grandfather, Johann, from a bridge he could see kayaks on a river. “I immediately became fascinated,” says Damschen. “But my grandfather told me that I had to be 16 years of age before I could learn it.”

So, when he reached that age, Damschen joined the Gelsenkirchen Kanu Club. Thereafter, for the next 12 years, he did kayaking in Europe, totalling a distance of 10,000 kms. “The kayaks, called Faltboot, could be folded up and taken around like a rucksack,” says Damschen.

However, in 1977, Damschen made a car trip, with Annelies, from Switzerland where he lived, to Kerala and Sri Lanka. They fell in love with Kerala. In 1981, the couple stayed in Thiruvananthapuram and spent six months there and six months in Switzerland. This went on for a few years. But, in 1996, Damschen settled in Kochi, where he has made a name as a restoration architect.

His future plans include teaching youngsters the joy of kayaking. “It is far more beneficial rather than spending time in malls, which is what most youths do these days,” he says, with a smile.

(The New Indian Express, Kochi and Thiruvananthapuram)
at June 21, 2016