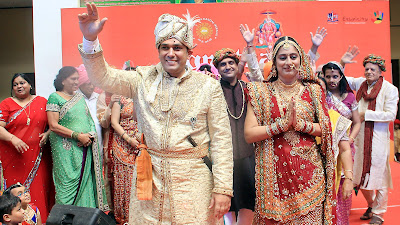 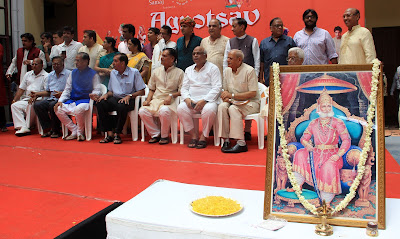 The one-day programme, on the Agrawal community, organised by 'Ethnicity--The Cochin Heritage Research Centre' of the English department of St. Albert's College, was a thumping success

“Who is the most famous Agrawal in the world?” says compere Akshay Agrawal.

Akshay burts out laughing and says, “No, it is Lakshmi Mittal [the London-based steel magnate].”

All of them had gathered in the college quadrangle to take part in 'Agrotsav', a one-day programme, which highlighted the culture, heritage, history and food of the Agrawal community.

The chief guest was Shabareesh Varma, the noted singer, who sent the youngsters into a frenzy of dancing, with his rendition of the hit song, 'Malare Ninne kanathirunal', from 'Premam'.

Soon, the lamp was lit in front of the photo of the community founder Maharaja Agrasen, who was born in 3125 BC. “This was during the Mahabarata period,” says Shyam Sundar Agarwal, chairman of the festival.

Thereafter, College Manager Fr. Antony Arackal inaugurated the snacks section at one side. The food included samosas, puris, kachori and different types of juices. Rajesh, the caterer, is from Rajashtan. “I have been living in Kochi for several years and provide food for all events of the Agrawal community,” he says.

The event was organised by 'Ethnicity--The Cochin Heritage Research Centre', of the Department of English. “Kochi is a melting pot,” says Nisha Thomji, the head of the department. “We felt it is necessary to study the various communities, who have settled in Kochi, like the Jews, the Gujaritis and the Konkanis. Last year, we had done programmes on the Goud Saraswat Brahmins as well as the Anglo-Indian community.” Incidentally, the centre was established in 2009 by Dr. Edward Edezhath, the former Associate Professor in English.

For this particular programme, it was noted writer KL Mohana Varma, who is also the chairman of the Centre, who came up with the idea. “I have been friends with Shyam Sundar for a long time,” he says. “It is a vibrant community and noted for its charitable works.”

The Agrawal community comprises only 150 families in Kochi, but they run around ten charitable institutions. “All of us are doing business,” says Rajkumar Agrawal. “But we also feel it important to give to society. Charity and donation are in our blood.”

Later, a seminar took place where speakers spoke about the history of the community as well as its culture and heritage. "This was arranged by the members of the Agrawal Yuva Mandal, especially office-bearers Akshay, Naren and Vinay Singhal," says Shyam Sundar.
There were also dances and a fashion show.

The younger Akshay, expectedly, belongs to the second generation. “I grew up in Kochi and can speak Malayalam well,” he says. “At home, I eat both North as well as South Indian food. I am also an alumni of St. Albert's. Many of our community members have passed out from this college.”

As for Shyam Sundar, a member of the first generation, he came to Kochi in 1987. “I grew up in Salem, which is a dry place,” he says. “So Kerala, with its rains, is like heaven for me.” Despite many warnings from community members, he set up a flour mill in Kochi, went through labour problems, which almost closed down his unit, but managed to survive. Later, he built a steel factory and is now a prosperous businessman.

Shyam Sundar's wife, Durga, says, “I love Kochi for its greenery, cleanliness, and peace. We have assimilated easily into the liberal Kerala culture and have many Malayali friends. They are kind and friendly.”

(Published in The New Indian Express, Kochi and Thiruvananthapuram)
at June 23, 2016