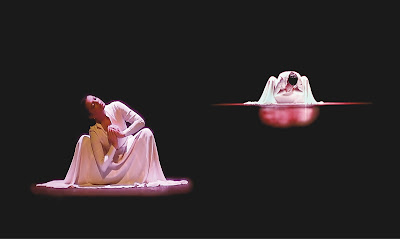 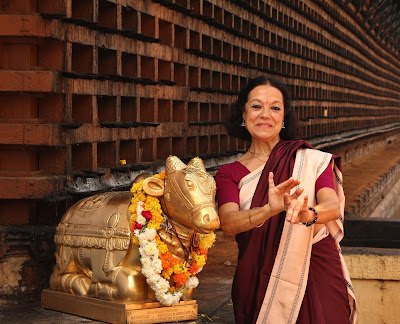 Frenchwoman Shakuntala fell in love with Bharatanatyam when she was 16. Today, she has performed in USA, Europe, Africa, apart from a recent performance in Kerala

As the Vedic hymn breaks out on the loudspeakers at the Kalashakti Mandapam at Vaikom (25 kms from Kochi), Bharatanatyam exponent Shakuntala slowly raises both her arms upwards. Then she moves to one side and places a palm over her face. Shakuntala is wearing a striking silver top over white pjamas. On the right side of the stage, there is a large traditional lamp.

In the second segment, Shakuntala dances to a poem by Sufi poet Rumi and concludes with another poem called 'Living The Promises of the Soul' with music by French mystic philosopher Jean-Claude Genel.

Shakuntala performed this original Bharatnatyam triptych on her first visit to Kerala recently. What was unusual about this performance is that Shakuntala is a Frenchwoman. And she has been performing the Bharatanatyam for three decades now, in the USA, Europe, Africa and India.

Her passion for the Indian dance form happened rather accidentally. One day, in the late 1960s, when she was a teenager, she was walking along the banks of the River Seine in Paris. Suddenly, she decided to enter a bookshop. There, she came across a book called 'A Sacred Dance'. “There were a lot of photographs of Bharatanatyam,” says Shakuntala. “I became fascinated.”

At that time, she was studying ballet at a dance school. But it took her three years to start learning Bharatanatyam under Frenchwoman Malavika. After a four-year stint, she secured a scholarship from the Indian Council for Cultural Relations, as well as the French government and came to Chennai. There, she studied under Kalaimamani V.S Muthuswamy Pillai for many years.

Asked the charms of Bharatanatyam, Shakuntala says, “You can express yourself through movement and stories. There is a lot of scope for creativity. I don't know of a similar dance form which is so expressive. On the other hand, ballet is very formal. There is not much emotion. In Bharatanatyam, one dancer can do all the characters, while in ballet you need several other people.”

Not surprisingly, Shakuntala has dwelt on the feminine force. One of her dances is called Parvati. “It traces the life of the Goddess from childhood till she becomes Kali,” says Shakuntala. “But one of my more popular items is the fight between Shiva and Meenakshi. I performed it more than 150 times worldwide.”

Once, when she performed it in Delhi, at the conclusion, the green room was crowded with people who had come to congratulate her.

Incidentally, Shakuntala has been one of the earliest dancers to use Vachika Abhinaya (using speech during a recital). “I wanted to make Bharatanatyam accessible to foreigners,” she says.

Asked whether there is a difference in audience reaction, across continents Shakuntala says, “There is not much of a change. All human beings are affected by the same emotions.”