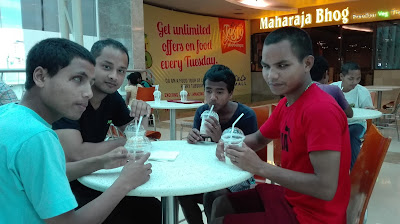 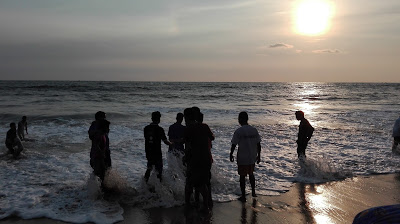 An unexpected setback in their travel plans enabled a group of visually-challenged footballers from Meghalaya to enjoy different aspects of Kochi, following the conclusion of the national championships at Aluva

Photos: the footballers at Lulu Mall and Cherai Beach

The 16 visually-challenged visitors from Meghalaya stood on the fourth floor of Lulu Mall, Kochi and listened intently to the sound of a roller coaster moving over the tracks. They had a look of fascination on their faces. “For some, this was their first-ever visit to a mall,” says Sunil Mathew, secretary of the Society for Rehabilitation of the Visually Challenged (SRVC).

However, owing to a paucity of funds, they were unable to buy tickets for the ride. Suddenly, a Good Samaritan intervened. This person, who was standing nearby, saw their look of disappointment and bought tickets for them.

They are all members of the visually-challenged football teams of Meghalaya, representing the towns of Shillong and Tura. The group had come to take part in the national blind football championships, which took place at Aluva recently. Both teams had lost in the semi-finals: Shillong to SRVC, Kerala, and Tura to the National Institute of the Visually Handicapped, Dehra Dun.

But when they were getting ready to return to Meghalaya, Sunil realised, with a sense of shock, that their wait-listed tickets had not been confirmed. “The next train was five nights away,” says Sunil. “So we decided to keep them occupied. That was why we took them to the mall.”

For Gabriel Nongrum, the visit to the mall was his first-ever experience. “I liked the facilities,” he says. “And because of the central air-conditioning it was very cool inside. It was nice to ride the escalators. And the people were friendly and kind.”

On another day, Sunil and MC Roy, Project head, SRVC, took the boys to Cherai Beach. “In Meghalaya, there are no beaches, so they were fascinated,” says Roy. “Many rushed into the water. They were laughing and whooping with joy.”

Tura team footballer Kling Sangma agreed. “I enjoyed the swift breeze and the roar of the waves,” he says. “It was a sound that I have never heard before.” Interestingly, there were many things about Kochi which the players found different.

“In the buses, there is more standing-room area in Kerala, than in Meghalaya,” says Kling. “There is also a larger space between the seats. Maybe, we have smaller buses in our state.”

And all of them loved the online cabs facility. “They would always arrive on time when we booked them,” says Meghito, also of Tura. “On the rare occasions when they were late, it was only by two minutes or so. We don’t have this facility in Shillong. Travel is so much more easier for us on these cabs.”

Not surprisingly, they found the food very different. “In Kerala a lot of oil and masala powder are used for cooking meat and vegetables,” says Gabriel. “In Meghalaya, on the other hand, we use very little oil.” Nevertheless, Gabriel enjoyed having appams and idlis. Then Gabriel smiles and says, “But there was no way we could understand Malayalam. It is spoken very fast. My own language is Khasi.”

Gabriel has just finished BA in political science from St. Edmund’s College in Shillong. Now he is planning to get a job and carry on playing football. “My dream is to be part of the Indian team which will, one day, beat Brazil, the No 1 team in the world,” says Gabriel, who plays as a forward.

When asked whether they would like to come to Kochi again, Kling said, “Yes, I will be coming back and joining the Blind Football Academy. Sunil Sir said it will be starting very soon.”