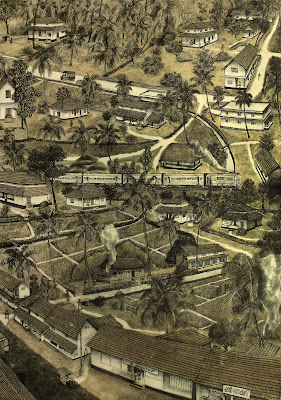 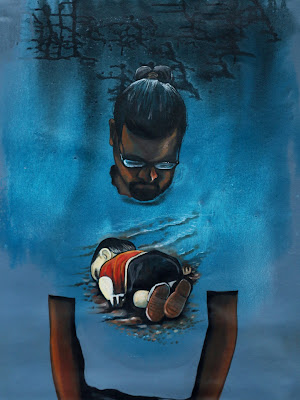 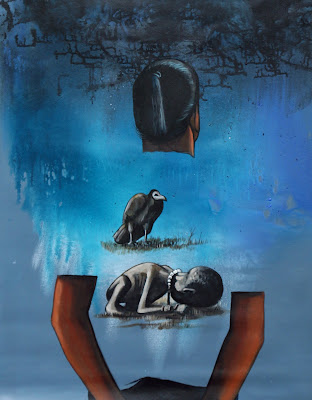 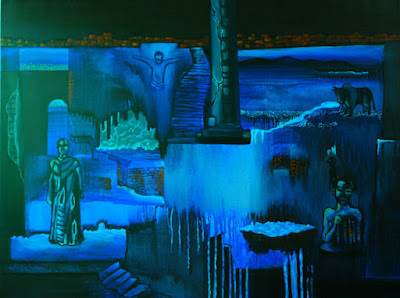 At the inaugural exhibition, at the Onyx Art Gallery at Mattancherry, 31 artistes are displaying an intriguing variety of moods and thought processes

A glance at artist Jagesh Edakkad’s graphite pencil drawing, 'A Glance To The Past', brings a smile to one’s face. It is a drone-like view of a village: the typical tiled houses of Kerala, with smoke billowing from chimneys. The narrow roads have very little traffic. There are numerous coconut trees, apart from paddy fields, dotting the landscape. There is the familiar bakery shop, a hotel and not, to forget, the ubiquitous toddy shop. And a train in the middle bifurcates the canvas neatly.

“It is a moment of nostalgia for me,” says the Kochi-based Jagesh. “This is an image of my village in Kannur. Nowadays, all the places are crowded and polluted. I wanted to show a village that was neat and environmentally-clean.”

He has memories of going to the bakery shop as well as the toddy shop as a child. “I would go and get fresh toddy so that my mother could make appams,” he says.

In complete contrast is Varghese Kalathil’s ‘Self-portrait with burning memories’. It shows two portraits side by side of the pony-tailed Varghese. In one he is looking downwards. Right in the middle of the chest, there is an image of a lifeless child in a red sweater. This is the world-famous image of the three-year-old Aylan Kurdi lying lifeless on a beach in the Greek island of Kos. Along with his parents, they were trying to escape to Europe on a boat from Syria when the boy drowned.

In the second portrait, Varghese has drawn the back of his body. This time, there is an image of a thin girl, with protruding limbs, with face bent, almost pressing into the mud, but looking in a state of agony. A vulture stands close by. This was a Pulitzer-Prize winning photograph, which was taken by the South African photojournalist, Kevin Carter, while on assignment to Sudan in 1993, where a civil war was taking place.

“There was a famine in the area,” says Varghese. “People were dying. The vulture was also waiting for the child to die so that it could eat her.” Unfortunately, Kevin was deeply affected by what he had seen in Sudan. The 33-year-old committed suicide a year later because of depression.

“I want to tell the truths of life,” says Varghese. “I am not very much bothered if the work does not sell. As for this particular work, I don't think anybody would like to put up in their homes. But I am okay with it.”

Another sombre work is that of Sreeja Pallam’s ‘Dirge of a Soil’ Through a broken wall, you can see a semi-naked woman clutching the dark brown mud. Next to her are the openings of two empty canisters pressed into the mud.

“The woman is a representative of Mother Nature,” says Sreeja. “I wanted to show that nature is being shattered. We are reaching a stage where the water cannot even penetrate the mud. We seem to have no address on this earth.”

Sunil Asokapuram is equally worried. In his acrylic on canvas, there is a person at the back of the painting with his arms upraised. “This is to reflect the crucified Jesus Christ to show the state of mankind,” he says. “We are being crucified by all sorts of problems.”

In the middle of the painting, there is a broken down pillar. “Again this is a metaphor to show the broken state of our society, politics, and the loss of belief worldwide in ideology and human beings,” says Sunil.

However, he has not lost all hope. At the side, there is an image of a man whose opened chest reveals a lamp burning. “This painting can elevate life for the viewer, and so can music, books and films,” he says. “There is always a space for good things to happen.”

A total of 31 artists are taking part in this inaugural exhibition of the Onyx Art Gallery at Mattancherry, which has been started by artists Onyx Paulose and Sara Hussein.
Almost all the works are impressive including those by OC Martin, Babitha Rajive, Robert Lopez, Baby KG, Devadas, Sajith Puthukkalavattom, Tom Vattakkuzhiy, Suresh Koothuparambau, Sreelal and Manoj Narayanan.

Curator O. Sundar said that he did not suggest any theme to the artists. “I wanted them to feel free,” he says. The artists have been invited from the districts of Kannur, Kozhikode, Malappuram, Thrissur, Ernakulam, Allapuzha, Kollam and Thrissur. “Many of them are unable to get a space to display their works at Kochi, the art capital,” says Sundar. “So I wanted to give them an opportunity.”

(The New Indian Express, Kochi and Thiruvananthapuram)
at November 27, 2017