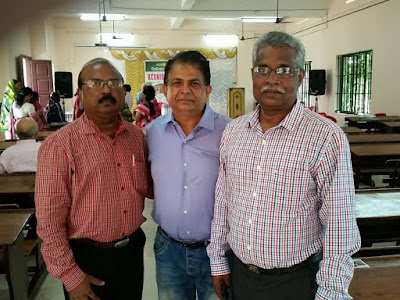 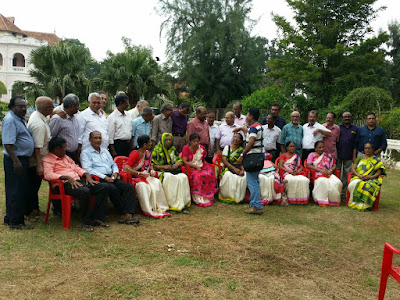 Malayali Jew Menahem Pallivathukal, who lives in Israel, talks about his experiences during the former students' reunion at the College of Agriculture, Vellayani

Photos: (From left): S. Jayaraj, Menahem Pallivathukal, and KN Sasi; the people gathered for the function

All three of them – hostel mates at the College of Agriculture, Vellayani (1971-74) – met on November 11, at the college campus where they held a reunion.

In college, Menahem was a big fan of the Bond movie franchise. Whenever he would have a friendly argument, he would use his fingers like a pistol. That was how he got the nickname of Bond.

Not surprisingly, everybody had retired except for Menahem. A Malayali, of Jewish origin, he works as a Chief Agronomist and Forest Officer at the Agricultural Department, at Netanya, 30 kms from Tel Aviv. “In Israel, the retirement age is 67,” says Menahem, who migrated to the Jewish country in 1975.

But all of those who came for the function had been gainfully employed. “They were mostly state government agricultural officers,” says Menahem. “A few worked in the agriculture department of banks. All worked until retirement. There were no job losses like it is there now.”

Interestingly, in the college, Menahem was the only Jew. And a humorous moment would occur often because teachers found it difficult to pronounce his full name: Menahem Pallivathukal Rufeldhor. “The teachers would try to pronounce it. Then they would say, ‘Please stand up and tell your name’,” says Menahem, who smiled at the memory.


Otherwise, he faced no problems whatsoever. “In the hostel, all of us, belonging to different faiths, came from places like Kozhikode, Kottayam, Thrissur, Kasaragod, Kollam, Kottayam, and Ernakulam,” says Menahem. “And we learned to live with each other in a harmonious manner. We were like brothers and sisters.”

But, like all college students, they were always up to mischief. “When classes became boring, some of us, after getting our attendance marked, would jump out of the window and make our escape,” says Menahem. “Thankfully, our classes were on the ground floor. And because there were 50 students in a class, the teacher also did not notice the one or two students who went missing.”

In the evenings, they would raid the farms within the campus and steal pineapples, bananas and mangoes. Sometimes, they would get on a boat and travel down the canal behind the college. “We would sing songs and have a good time,” says Menahem.

They would also go for evening film shows, and inevitably miss the 10 p.m. deadline. “When the warden would come inspecting our rooms, he would not see us and our parents would be informed,” says Menahem. “Then we had to do a lot of explaining to our own families.”

All these joyful memories were exchanged among the former students and teachers.
But there were sombre moments too. Quite a few of the teachers had died. And Menahem’s closest friend in college, O.V.A. Fuad, who was from Tellicherry, died because of some problem with his nerves. “I miss him very much,” says Menahem. In total, seven classmates have died so far.

For the function, 37 people attended, out of which eight were women. “We have plans to hold the next reunion a year later at Kochi,” says Menahem. “Hopefully, I will be able to attend.”

(The New Indian Express, Kochi and Thiruvananthapuram)
at November 21, 2017