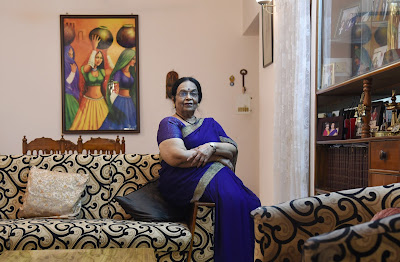 At 81, Lalitha Das, the founder of the Bangalore Club for Kathakali and the Arts, is busy promoting the art form

On most mornings, these days, Lalitha Das is on the phone. Either she is calling up Kathakali dancers or speaking to hotel employees or tour operators or sponsors. That is because she is preparing for an upcoming Kathakali production. “All the artistes will be coming from Kerala,” says Lalitha, the founder of the Bangalore Club for Kathakali and the Arts. “There is a lot of hard work behind the scenes. But I feel confident after our last programme went off so well.”

This took place at the Chowdiah Memorial Hall on a balmy October evening where the Kathakali classical opera, ‘Karna: The Invincible’ was enacted. In the first scene, the dancers stood one behind the other and raised their hands to the heavens. Right behind, on a screen, there was an image of the orb of the sun rising between two mountain peaks.

“In this scene, Kunthi asks for a boon and is granted a son by the Sun God,” says the director and scriptwriter Meena Das Narayan. In the next scene, Karna the baby is adopted by a charioteer and wife and grows up as a commoner. Eventually, he becomes an ace archer who challenges the Pandavas and Kauravas in a display of strength.

Watching from a corner with a smile on her face is Meena’s mother Lalitha. The sequences of the sumptuous cultural extravaganza are dramatic, with dancers wielding maces and jumping across the stage accompanied by pulsating music. Karna is played by Kathak dancer Tushar Bhatt, while his wife Pooja has done the choreography. A total of 55 artistes are taking part.

The idea for a cultural club came up over a dinner conversation that Lalitha had with Meena and her husband, Narayan, after her husband KG Das passed away in 1999. “It became difficult for me to travel to Kerala on my own to watch Kathakali performances. I felt that through the club, we could popularise as well as watch Kathakali in Bengaluru,” says Lalitha.

Today, the club is thriving. But Lalitha has a clear agenda. “I want to promote Kathakali among other communities, like the Kannadigas, Tamilians and the Telugu people,” she says. “Hence, the mudras are explained in detail so that the audience can follow the performance and understand it.”

Apart from Kathakali, the club promotes other classical dance forms like the Kuchipudi, Mohiniyattam and Bharatanatyam.

But the emphasis is on Kathakali. “It is an enduring love,” says Lalitha, who learnt the dance form as a child while growing up in Thiruvananthapuram. Thereafter, at age 17, she got married and left Kerala. Since her husband, a chief engineer, had a transferable job, she moved from place to place: Burla (Odisha), Delhi, Pune, Baghdad and Tripoli. Sometimes, she would organise Kathakali performances whenever the couple were in India.

Asked the charms of Kathakali, Lalitha says, “Kathakali is a combination of excellent music, percussion, and action. There is no other art form that combines all three so well. And the artistes are so dedicated and look beautiful.”

Not surprisingly, her idol is the legendary Kalamandalam Gopi. “When he is in full costume, like Karna, he takes us back to that era,” says Lalitha. “He has the magic to immerse himself in the character. And his eyes are so expressive.” Incidentally, Meena made a documentary on Gopi, called, 'The Making Of A Maestro', which won the Kerala State Award for best documentary in 2010.

Meanwhile, when asked about her future plans, Lalitha says, “I plan to conduct at least five to six performances every year. At 81, I am having the time of my life.”