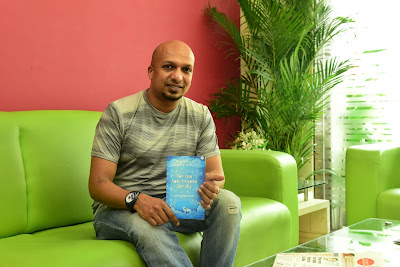 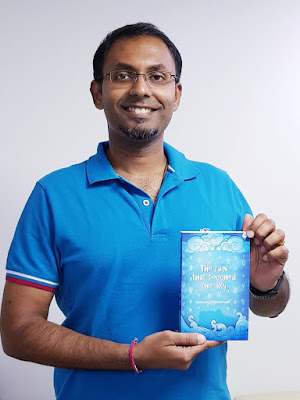 Joseph Premal Austin and Manoj N Nair, two corporate professionals, one based in Kochi and the other in Dubai, have teamed up to write a novel

Joseph Premal Austin met Manoj N. Nair when they were both studying at the SRM School of Management in Chennai. “We clicked,” says Premal. “So we became friends.” But after they graduated, they went on different career paths.

While Manoj is the general manager of an event management company in Dubai, Premal was, until recently, the CEO of a building firm in Kochi. But as the years went by, they felt that they had a dormant passion for writing. So, in 2009, they decided to write a book. While Manoj wrote some parts in Dubai Premal did the other sections in Kochi. “To discuss plot changes and character traits, we would call at night or exchange Whatsapp messages,” says Premal.

Then last year they finished the book but it was huge, at 535 pages. “Usually, for a first-time author, the manuscript should be about 250 pages,” says Premal. “So, we needed to cut down.”

This was done by the duo, along with the help of editors at the New Delhi-based Zorba Publications as well as Dr. Fr. Aniyil Tharakan, a professor of English at Mar Ivanios College, Thiruvananthapuram and Sreedevi who runs an online journal.  And the author’s name on the cover is interesting: manojnpremal, with the ‘n’ standing for ‘and’.

The novel, 'The Rain That Touched The Sky' is of an 18-year-old boy called Akash who spent many years in Dubai and has come to Mumbai to do his college studies. “The book is all about his experiences in India, his relationship with his parents, friends and the society at large,” says Manoj.

Interestingly, the novel begins with a humorous incident. Akash, along with his uncle, take a crowded local train from Ghatkopar station in Mumbai. And to quote from the book: 'He was jolted when he suddenly felt a pair of soft yet tantalising mounds pressing against his back.'

“I am getting groped by a lady,” he thought. “What the hell? Which decent woman would be doing something like this? And why? Is she a hooker or something? Or is she is in so much heat? What an embarrassment!”

'It's not often that one gets groped by a woman, with her breasts pressed against his back while her tantalising fingers are playing delightful tunes of desires around his nether regions, and that too in a train.'

It is only much later, when Akash gets into an auto rickshaw, reaches his destination and attempts to pay the driver that he realises the woman who had pressed against him was a pickpocket and had taken his purse.

It is an intense novel, with many incidents described in detail. You get immersed in all what is happening, including how Akash falls in love. To give an idea, the duo has put up a trailer on YouTube. Already people from 25 countries have viewed it.

Meanwhile, when asked to compare writing to the corporate world, Premal says, “When you are working as a CEO you are working in a controlled environment. There are rules and regulations within and outside the organisation. And there is an intense competition with other companies.”

But when you are writing there are no rules. “You are the master of what you create,” says Manoj. “And you have the ability to make your protagonist do what you want. The liberty and freedom to create are unlimited and beautiful. When it results in a book, the joy is indescribable.”

Thanks to this joy, Premal now has some regrets about the course of his life. “I could have been a writer if I had not succumbed to the dictates of society,” he says. “I cannot blame anybody but myself. Society goes in a certain way. But we have the choice to follow them or go on another path. And if you go on your own path, you will feel free. To sum up, I want to be a full-time author, but it all depends on how this book fares in the market.”

So far the reviews have been good. “'The Rain That Touched The Sky has really touched my heart. It is an interesting story. The presentation and flow are amazing. The language is simple and easy to understand,” says one reviewer on Flipkart. Another wrote, “There is a good combination of gaffes, bromance and romance. The characters have several layers which are good.”

So, a corporate duo is venturing into the tumultuous and uncertain world of English writing and publishing, where the rewards are uncertain and the future can be tough, unless Lady Luck smiles on them.

(The New Indian Express, Kochi, Thiruvananthapuram and Kozhikode)
at August 09, 2018