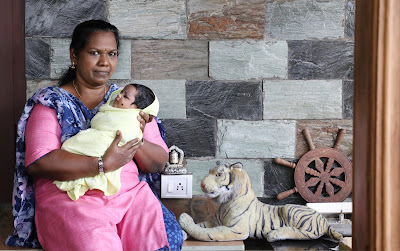 For the past several years, home nurse Mini Thomas has looked after babies from the moment they are born till about three months. She talks about her experiences

It was the third child of Sona Das (name changed). She already had a boy and a girl. This one was a girl. Home nurse Mini Thomas had been hired, through the Red Cross, to look after the baby. Because of a Caesarean operation, Sona was going through a lot of pain. She was feeling angry and frustrated. “So when the one-month-old baby cried for too long, Sona would slap its wrists quite hard,” says Mini. “Then the baby would cry even louder.”

Mini told Sona not to do this. “Then I would take the baby away and say, 'Sona, what does the baby know? Why are you hitting her?'”

In Mini's 15-year career of looking after more than a hundred just-born babies, this was the only instance when a mother was cruel to her baby.

However, many mothers go through a post-partum depression. “They feel overwhelmed by the responsibility,” says Mini. “They are tired and in low spirits. Sometimes, a few mothers have told me, ‘Wish you could also breastfeed the baby’.”

But Mini also faults the young generation of mothers. “Some of them are lazy. Most of the time, they are engrossed in their mobile phone, either talking to friends or checking Whatsapp messages. After they speak for a while, they end up getting a headache. They are not supposed to speak for a long time. They also watch TV a lot.”

Another drawback of the young generation is that they do not have any patience. “They want things to happen fast, but babies are not like that,” says Mini. “They take their time. Sometimes, they will cry a lot. You have to put the child on your lap, sing lullabies and make them feel calm and loved.”

The good news is that there is no change in pride, happiness and attitude on the parents’ part whether it is a boy or a girl. “After all, it is magical, the birth of a child,” says Mini.

Most babies are born normal and healthy. But Mini remembers a boy who was prematurely born in the eighth month. “The baby weighed only 800 grams,” she says. “The mother hardly had any milk. Anyway, we fed it using small spoons.”

The boy had to be fed every hour. The mother had to physically take out the milk. All the utensils had to be boiled to get rid of germs. “We did this for two months,” says Mini. “I did not get any sleep at all. It was only in the third month that the baby had the strength to suck from a bottle.”

Thanks to her experience, Mini now gives specific tips to new mothers. “Whenever the baby is hungry, provide the milk,” says Mini. “Don't make the child cry too much.”

The mother should give toilet training to baby. “Just raise the legs, and immediately the child will pass the motion,” says Mini. “For 28 days, motion happens all the time. After that, it is about three times a day. The baby learns to do it every morning.”

Babies should be given a good feed at 9 or 10 p.m. Soon after that, it should be made to go to sleep. “The baby will probably sleep the whole night,” says Mini.
“I have taught these babies and their mothers would later tell me on the phone that their baby goes to sleep promptly after 9 p.m.”

Another tip: it is better to make the children have a bath at about 8 a.m. Children like the morning bath after a full feed.

When asked whether babies notice anything in the first month or so, Mini says, “They notice children who may be four or five years old. They also stare at the fan a lot of time. Then they will smile. Some babies will look at photos in magazines. But it is too early for them to recognise the father even if he carries the baby and kisses and cuddles it. That recognition comes later. Maybe, in the third or fourth month.”

Meanwhile, when asked what she likes about this exhausting job, Mini says, “When I look at the face of a baby, with its extraordinary innocence, I feel as if I am looking at the face of Baby Jesus. There is a divine light on their faces. It brings me a great joy.”

(The New Indian Express, Kochi, Thiruvananthapuram and Kozhikode)
at August 11, 2018