Saving Pigeons On The Ninth Floor 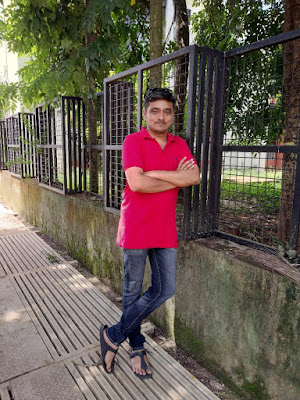 Director Vishnu Narayan talks about his experiences in the films, 'Maradona', ‘Gangster’ and 'Maheshinte Prathikaaram'

In a scene from the film, 'Maradona', Tovino Thomas, who plays the protagonist, wants to rescue baby pigeons sitting in a nest, in an opening in the wall of the 9th floor of a building by using bed sheets tied together to form a rope. He then has to sidle down outside the balcony, from the 10th floor, and all this was supposed to be done when it is raining heavily.

But the residents’ association of the block of buildings at Bengaluru which was the location for the shoot, refused to allow the use of artificial rain. “I felt very disappointed,” says debutant director Vishnu Narayan. “In the end, we decided we would shoot without the rain, and add it later, through computer graphics.”

But as the shoot was about to begin, amazingly, it started raining. “Immediately my eyes filled up with tears,” says Vishnu. “It came at the perfect time.”

Quickly, the director and his crew captured all the shots that they needed. Within half an hour, the rain stopped.

“The next scene did not need any rain,” says Vishnu. “In fact, we needed helicam shots. So, the rain stopped at the right time.”

Vishnu feels emotional when he recounts this incident. “I believe that our sincerity and honesty in making the film ensured that an Universal Power stepped in and helped us,” he says. “For the past two years, I have been working very hard on this film. After a lot of struggle, I could bring it to the screen.”

But there have been moments of light-heartedness during his career. In the film, ‘Gangster’ (2014), Vishnu, along with a group of youngsters, had a chance to work with Mammootty for the first time. “He was a legend to us,” says Vishnu, who was an associate director in the film. “We watched his films from our childhood.”

Just before the shoot began, at Mangalore, Mammootty had a look around. “All of us were wearing T-shirts and shorts, including the director Aashique Abu,” says Vishnu.

But Mammootty called Aashique and in front of the crew, he said, “When these guys come tomorrow, ask them to wear jeans. So much of the new-generation style is enough.” Then he walked away.

“We were all stunned,” says Vishnu “We did not know whether he meant it or not.” But the crew carried on wearing shorts. After several days, again, during the middle of the shoot, Mammootty again spoke to Aashique, “I told you once before, everyone should wear jeans, instead of shorts.”

Once again, the youngsters carried on wearing shorts. But, on the last day of the shoot, in Goa, after 40 days, Mammootty suddenly appeared. “And he gave us all a shock,” says Vishnu. “He was wearing a T-shirt and shorts. When we looked at him, with our mouths open, he said, 'I am new-generation now'. That was when we realised that he was actually teasing us when he said we should all wear jeans. He showed that he is as young as all of us.”

Then, in another sequence for the same film, the location was at the port of Mangalore. “Actor Kunchan was standing on top of a pile of coal and was supposed to roll down,” says Vishnu. “Mammootty was sitting on the bonnet of a Range Rover at the bottom and was supposed to give a dialogue.”

There was coal dust everywhere. To get an overhead shot, the crew used a helicam which was imported from Ireland. “It was a big one, almost like a small helicopter,” says Vishnu.

The shoot began. But when the helicam came closer, dust began to rise up fiercely in the air. “Soon, there was a black mist all around,” says Vishnu. “We could not see anything in the shot. We felt scared. If all this dust fell on Mammootty the shooting would have to be stopped.”

Aashique, Vishnu and other crew members ran through the dust to see what had happened to the superstar. “But when we reached the vehicle, we saw that an assistant, who had seen the dust arise, managed to locate a sheet in the car and covered Mammooty entirely with it. So no dust fell on Mammootty and we felt so relieved. And since the shot had come through nearly perfectly, we decided not to go for a re-take.”

But there were imperfect moments during the shoot of 'Maheshinte Prathikaaram' (2016). In one scene where the hero Fahadh Faasil is having a hand-to-hand fight with a character called Jimson on a ground near the Idukki dam, he sprained his ankle. “We had to put a bandage and the doctor advised two days of rest for Fahadh,” says Vishnu.

So, on the next day, the crew, including the director Dileesh Pothan, decided to play a game of cricket. The local boys also joined in. During the game, Dileesh had to chase a ball. But because of the rain, there were small wedges in the mud which had dried up in the sun.

“His foot got stuck in one of them and got sprained,” says Vishnu. “Dileesh was immediately rushed to the hospital and had to be put in plaster. It turned out to be far more serious than what had happened to Fahadh. “Thereafter, when the shooting resumed, we had to lift him on our shoulders when we had to climb steps or carry him on a chair,” says Vishnu. “So, two of the most important people in the film got injured at nearly the same time.”

(The New Indian Express, Kochi, Thiruvananthapuram and Kozhikode)
at August 29, 2018