A Gem in the making 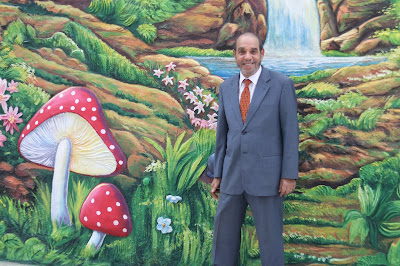 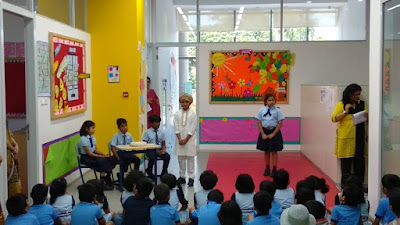 Executive Director Peter Lugg speaks about the new GEMS Modern Academy at Smart City, Kochi, one of the few schools in Kerala which offer the International Baccalaureate curriculum

Pics: Peter Lugg; a view of the school

One morning, Peter Lugg, the Executive Director of the GEMS Modern Academy at Smart City, Kochi got a call. It was from IT professional Anish George (name changed) who was calling from Mangalore.

Anish’s two children, Mark, 7, and David, 5, had been studying at Gems. But when the parents relocated, for better salary and other benefits, they had to put the boys in a new school. But it was clear to Anish and his wife Geetha that their children were unhappy. They were not enjoying school. So Anish called Peter and wondered what to do.

“Look, your children should be the focus of your life,” said Peter. Anish understood immediately and amazingly, unlike most Indian parents, they returned to Kochi so that the children could study in a school they liked.

“Happiness is a huge factor in a child’s life,” says Peter, who is of British-origin. “Because if a child is happy, he or she learns easily.”

One reason why the children love Gems is that the teaching is very different. Suppose, one day, the students are studying about volcanoes. In Gems, there will be different lines of enquiry, across several subjects. In geography, they will look at the different types of volcanoes. In history, they will study volcanic eruptions over the decades. In physics, they will look at the force of a volcanic eruption, and how its force and energy can be harnessed.

“We will get them to answer social questions: How many people are displaced during a volcanic eruption, and where do they go?” says Peter. “Why do they settle near volcanoes in the first place? Is the soil rich? How long have the people been living there?” There will be an art class where paintings on volcanoes will be done. In English class, students will write poems on volcanoes.

“What we want to impress upon our students is that each discipline is inter-related,” says Peter.

Interestingly, the boys are taught differently from the girls. “We know the boys prefer kinesthetic learning (learning through physical activity),” says Peter. “If a boy is 13 years old, his normal concentration level is 13 minutes. And so after 13 minutes of just teacher talk, they will tune off and start thinking about other things. So the teacher immediately changes the focus. He or she might take them outside and ask them to bounce a ball. It's called a breakout and then the students are brought back in, and the concentration levels become high once again.”

As for the girls, they are happy learning visually and orally, but they also have lapses in concentration. “So the teachers will do something different,” says Peter.

The Gems Modern Academy, set in an 8.3-acre campus, offers an International Baccalaureate syllabus as well as the IGCSE and ICSE curriculum. Thus far, there are classes from pre-KG to Class 6. Each class will have a maximum of 25 students.

From June onwards, Class seven will be added. And following that, every year, a new class will be added, till Class 12.

The facilities include dance and art studios, a medical facility, libraries, IT suites, science labs, and two swimming pools. “One will be 25 metres long and the other is a children’s pool,” says Peter. “There will be a multipurpose sports hall that will be ready soon, as well as a two-level dining hall.”

The school is part of the Gems Education Group which runs 70 schools in 12 countries. Asked why Gems has come to Kochi, Peter says, “Our chairman Sunny Varkey is from Kerala. He realised that Kochi, along with Smart City, is an attractive proposition for an international school. Kerala has many CBSE  and ICSC schools, so there is space for a school that is international in flavour.”

A unique concept is the easy access of parents to the school. “They are welcome to come in anytime they want and can sit in on any class,” says Peter. “It's their child. This is their school. They have given their ‘gems’ to us. So, they have every right to see what is happening in the classroom. Why should I block them? Parents are our partners. They can watch their children roller skating. And if they want, they can bring their own pair, and skate with the children.”

Parents, indeed, are satisfied. Says entrepreneur Amit Sarkar, father of six-year-old son Vedaant, “The curriculum is a class apart. They teach in an unique way and avoid the . blackboard. My son is learning words through the phonetic way. I am very happy with the school.”

Executive Director Peter Lugg of the GEMS Modern Academy, who is of British origin, has an Indian connection. His mother is half-Scottish and half-Indian. When she told Peter, who was living in London, to spend one year in India, Peter enrolled at St. Stephen’s College in Delhi. “The moment I landed in India I felt at home,” he says. “Soon I fell in love with the place.”

That got cemented when Peter married an Indian woman. Some of the places he has worked in include as an English lecturer in Delhi University, Woodstock school in Mussoorie, and the American school at Kodaikanal. Thereafter, Peter spent many years in West Asia: the Cambridge International School in Dubai as well as the Gems Cambridge High School in Abu Dhabi.