In search of a dying girl 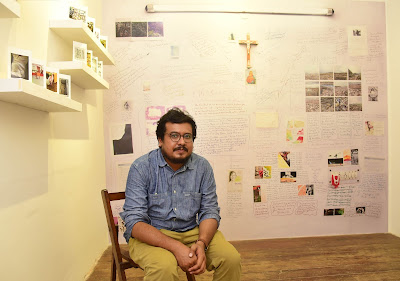 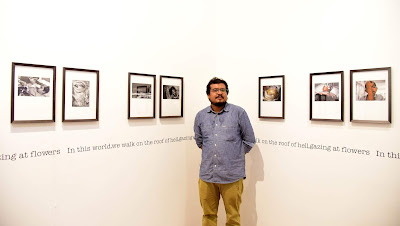 At the Kochi Muziris Biennale, documentary photographer Chandan Gomes focuses on a scrapbook of drawings which he came across at a hospice as well as people suffering from mental illness

And the story behind them is poignant. At the hospice within a hospital at Jaipur, Chandan saw Aini’s scrapbook on a shelf near a TV set. But when he inquired, he was told Aini had left. The hospital then told Chandan they would be unable to provide the address in order to protect the privacy of the patient.

“I was not disappointed because I was confident I could figure it out by talking to the nurses and attendants,” says Chandan, who had befriended a few because he had been spending several days in the hospital.

That was because Chandan had been commissioned to take photos of the patients, nurses, doctors, attenders and administrative personnel. The hospital was completing four decades and they were bringing out a coffee-table book.

But soon, Aini became an obsession. Whenever he found time, Chandan began travelling to the mountains and took shots similar to the ones that Aini had drawn. “The idea was simple,” he says. “Someday I would give Aini the book, with my photographs pasted next to her drawings, and maybe even sponsor a small trip to the mountains, which she had not seen in real life..”

But the search for Aini proved difficult. A young nurse gave four leads, three of which turned out to be false.

But the fourth led to a village called Baran in Rajasthan. Chandan, who is based in Delhi, went by bus. In the town, he managed to trace the girl’s uncle, Shaukat. “He told me the painful news that Aini had passed away,” says Chandan.

But now Chandan wanted closure by meeting the father, Anwar. But Shaukat only parted with the information about his brother’s whereabouts after he was paid some money.

Anwar was working in Narela, which is on the outskirts of Delhi. Chandan set out in September, 2013 to meet him and managed to locate him in a shanty. It had a crumbling roof and bare walls.

The first meeting was a disaster. “I was judging him by thinking, ‘how could he have let his daughter die?’,” says Chandan. “I did not understand that poor people have no choice. They cannot afford health care. They don’t have an education so they don’t even know their rights. They are at the mercy of the system. We had a tense conversation.”

At the second meeting, a week later, Chandan shared his meal: mutton curry and rotis. That eased the discomfort between the two.

Feeling that Chandan had accepted him, Anwar gave his daughter’s dolls, photographs and crayons to the photographer. “Aini suffered from a rare blood disorder,” says Chandan. “It was an expensive treatment. Even a lot of middle-class people would have struggled.”

But Anwar was going through a visible agony as he recounted his helplessness of not being able to save his daughter. “His pain became so unbearable that he began drinking heavily, to numb himself,” says Chandan. “His wife took their small son, and left because she was also angry with Anwar for not preventing Aini’s death.”

Chandan shook his head and says, “This experience taught me that there is so much more suffering in this world than what you are going through. Like, I would fret if there was no electricity in the house for five hours. I felt very small in front of Anwar. Too many lives are lost in this casual and brutal manner in India.”

Another series, placed next to Aini, begins with a haiku by the 17th-century Japanese poet Kobayashi Issa: ‘In this world; we walk on the roof of hell; gazing at flowers.’

The photos are of people who are going through a mental illness. “What is going on in the mind is never visible,” says Chandan. There is an image of a woman with her mouth open who is suffering from dementia. Another is of a baby who is just two days old. “Babies don’t have a language to express themselves, so I wanted to show the expressions,” says Chandan, who is the first Indian to have a solo show, after a decade, in July, 2018, at the prestigious Rencontres d’Arles Photo Festival in France.

(The New Indian Express, Kochi, Thiruvananthapuram and Kozhikode)
at February 11, 2019