God is within you. Get in touch 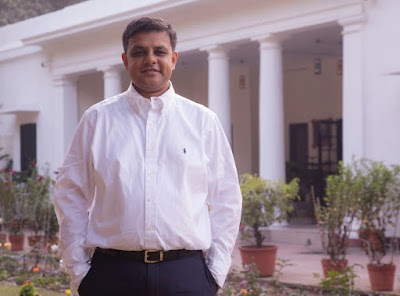 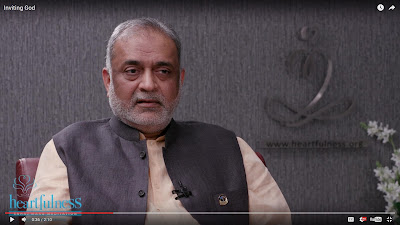 At the Kerala Literature Festival at Kozhikode, held recently, entrepreneur Rishabh Kothari says, “So we are going to discuss an interesting subject, ‘Leadership and Self Management’. Rishabh was the moderator for an interaction with World Public Speaking champion Manoj Vasudevan and Joshua Pollock, co-author of the best-selling ‘The Heartfulness Way’.

Like Joshua, the Kolkata-based entrepreneur Rishabh is a proponent of ‘The Heartfulness Way’. Asked what it is, Rishabh says, “You sit in a comfortable position, either on a chair or on the floor and say to yourself, ‘There is a divine light in my heart’. You are not supposed to imagine or look for a light. Instead, you should try to feel the divine presence.”

But initially, the mind will always wander off. “When that happens, just bring it back gently to the heart. Our thoughts get their power from our attention. So, ignore them.”

And this simple practice, which Rishabh has been doing for one hour every morning, for 30 years, has changed his life. “It has changed the way I do business,” he says. “What happens is that when people meditate they become more focused. Your decision-making is clearer. There is a sense of purpose. The way you interact with your employees changes. I feel calmer and steadier, and at peace with myself.”

He says meditation has become an imperative in society. “If there is inner strife, it will reflect in outer problems,” says Rishabh. “When I look at my friends, colleagues or acquaintances, and I see the way they are reacting to their problems, I feel that I am very fortunate to have a process or a system which helps me to be centred and calm. In life, what will happen will happen, there is no choice. But what you can control is our reaction to it.”

To make sure that people are better equipped to deal with stress, Rishabh travels to different cities and holds meditation classes. He is one of 10,000 trainers globally. It is a volunteer service. And participants don’t need to pay also.

So far, the reactions have been varied. “Some people said they enjoyed it, others had tears in their eyes, and many felt as if they had just taken a dip into an ocean,” says Rishabh. “They felt so fresh.”

He remembers a 17-year-old boy Anand (name changed) who was not sure about which career path to take. “Anand wanted to do something but his father was saying something else,” says Rishabh. “His friends were advising something else.”

But after the 30-minute meditation session, Anand said, “I feel so confident. All my doubts have been cleared. I know now what to do.”

Like Anand, Rishabh was also confused about his life. Till one day, in 1988, when he was 15, his father took him to meet Parthasarathi Rajagopalachari or Chariji (1927-2014), who was the global head of the Heartfulness Way. It has its origin in the Spiritual Practice of Sahaj Marg offered by the Shri Ram Chandra Mission (srcm.org).

“At that age, I was convinced that spirituality and meditation were for losers and social dropouts, people who have nothing better to do,” says Rishabh. “But I read up about Chariji. He had joined the TTK Group as a sales person, but when he retired, he was the executive director. I realised that he had a very successful corporate career, so what was he doing with something like this?”

The first thing Rishabh found most remarkable was that Chariji was wearing a T-shirt and trousers. “I knew of Christian priests wearing white cassocks and Hindu holy men wearing saffron robes,” he says. “It was a culture shock for me.”

Again, when Rishabh bent to touch the feet of Chariji, the latter just shook the hand and said, “Hi, sit down.”

The subjects that Chariji spoke about was wide-ranging. “Chariji was talking about astronomy and planets,” says Rishabh. “I had just been reading ‘A Brief History of time’ by [British physicist] Stephen Hawking. That book was fascinating. And here was this man who was equally at ease talking about the Gita as well as astronomy. For the next hour-and-a-half, I remained fascinated. Every preconceived notion that I had was gone.”

Rishabh pauses and says, “It was a turning point in my life.” And Rishabh continues to propage Heartfulness Meditation with ceaseless vigour and energy.

Entrepreneur Rishabh Kothari follows Kamlesh Patel, or Daaji as he is affectionately known, who is the present Global Guide of Heartfulness. “Daaji is an original voice in an ancient tradition,” says Rishabh. “His teachings arise from his personal experience on the path of Heartfulness, while reflecting his spirit of enquiry and respect for the world’s great spiritual traditions and scientific advancements.”

Born in Gujarat, Daaji showed an early interest in spirituality. In 1976, he met his Guide, Shri Ram Chandra, the founder and first President of the Shri Ram Chandra Mission at Ahmedabad.

Daaji moved to the US in 1980 but continued the Raja Yoga system of Sahaj Marg, with great devotion. Daaji became a follower of Parthasarathi Rajagopalachari (Chariji), the second President. Following Chariji’s passing on December 20, 2014, Daaji became the President of the Mission.

(The New Indian Express, Kochi, Kozhikode and Thiruvananthapuram)
at February 08, 2019